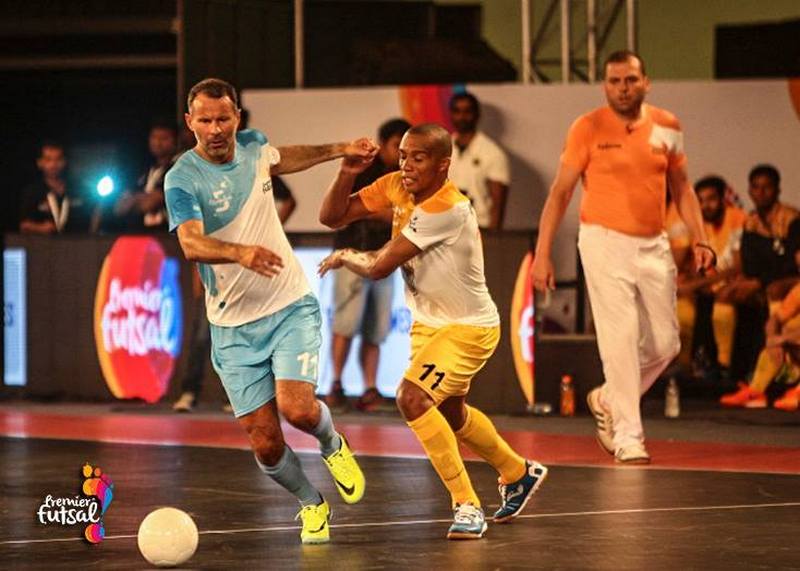 Mumbai overpowered Chennai in the first ever Premier Futsal game in Chennai. Giggs played a starring role as they produced a defensive and counter-attacking masterclass to put Chennai to the sword

Chennai’s most notable player was Falcao the Brazilian trickster. He had been named as the best futsal player in the world for four times and is also called as the Brazilian Pele. They also had in their ranks Sean Garnier the freestyle champion.

Mumbai were not short of firepower either with Ryan Giggs the Manchester United legend and Foglia who won the best player award in 2003.

Mumbai opened the scoring after they won a penalty. Sirilo’s handball allowed Foglia to step up and score a calm penalty sending the keeper the wrong way. In the first quarter, Chennai had the bulk of the chances but couldn’t back their flair play with accurate finishing

The second quarter started badly for Chennai as they went two goals down. Mumbai robbed them of possession and Angellot produced  a brilliant piece of ball control to leave the keeper on the floor and blast it into the open net.

Chennai kept having a lot of the ball but Mumbai’s firm and organised defence ensured they remained a step ahead in the second quarter. Mumbai were employing the classic counter tactic breaking every time Chennai lost the ball.

Falcao continued to display his full array of tricks but Mumbai kept hold of their 2-0 lead at half time.

In Futsal a game can turn in a minute, so Chennai could not be ruled out of it at any stage. They almost got a goal back as Sirilo’s shot stung the bar but right at the end of the 3rd quarter Giggs turned on the style.

After a few no-look passes, the United legend set up Foglia for his second and Mumbai’s 3rd on the night. It was like Giggs of old, and maybe he has found a revival in his career with futsal.

It was turning into a rout as Ramirez made it for with a wonderful side foot finish right into the top corner. Minutes later Chennai finally opened their account with Sirilo toe poking it home after a miscommunication in defence.

Falcao got a second goal back as he thrashed one into the net after bamboozling a couple of defenders. But that’s how it ended as Mumbai won the opening game of the Premier Futsal League.