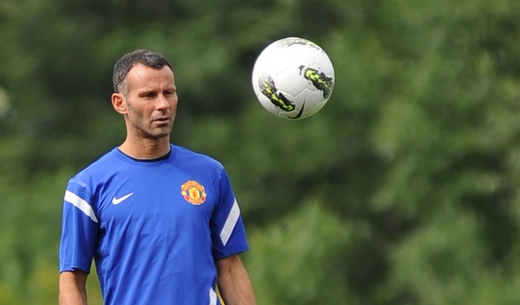 Ryan Giggs discusses the new season in an exclusive interview for ManUtd.com at the official opening of the United Megastore...

You’ve won every game, friendly or otherwise, since the Champions League final. You must be pleased with that…
Yes, we hope we can carry on our winning run. We were obviously pleased with pre-season, with a few new players coming in and a few of the younger lads coming back to us from their loan clubs. Everyone played their part in pre-season, that’s important as you get ready for the new season. We’ve started well and long may it continue.

Arsenal seem to be down to the bare bones with key players leaving plus some injuries and suspensions. United fans might be expecting an easy home win but would you caution them against that?
Yes, because Arsenal are still a quality team with quality players. On their day they can beat anyone in Europe. They’ve proved that for years and years now. Okay so they’ve got a few injuries and a couple of players have left but they’ve still got so much quality there, they’ve got a great manager and Arsenal are a great club. So you never underestimate teams like Arsenal with their history.

Arsenal are evolving but so are United. Do the young players in the squad excite you and, as they do the manager, keep you young and fresh?
Yes they do. You see young players come in or you see young players develop right in front of you. As an older, experienced player it’s great to see that. Part of my job over the last few years has been helping them both on and off the pitch. If I see something on the pitch that I think I can help them with, then I will. It’s something I enjoy doing and the young players take it on board because they all want to get better, they want to improve and again that’s great to see. Training nowadays can be a bit sharper than it used to be (laughs) but it ups your game and that can only be good for the other players.

I presume you’re talking about players like Tom Cleverley and Danny Welbeck, who’ve both been here for a long time. Are we now seeing the fruition of their development?
Yes, we’ve seen the ability that they’ve had over the years. Like you say, they’ve grown up in the youth team. You always keep an eye on the youth players with special qualities. Daniel and Thomas are players who’ve got great ability and now they’ve grown up, both physically and mentally because they’ve gone away to other clubs and done well, now they want to come back and stay at the club. I’m sure they will because they got off to such a good start this season and they’ve got so much talent. But they still want to improve and to learn, and they will.

Finally, a question about yourself - you started about half the games in all competitions last season, still a good percentage given the competition for places. Are you hoping for similar or better this season?
I’m experienced enough to know I’m not going to start every game or even play every game. The thing I want to do is be effective and contribute to the team. As soon as I stop doing that, I’ll finish. Hopefully I can just contribute to the team, to the club, whether it be starting a game or coming on and using my experience in games. You want to play every game, of course, but I know I can’t.