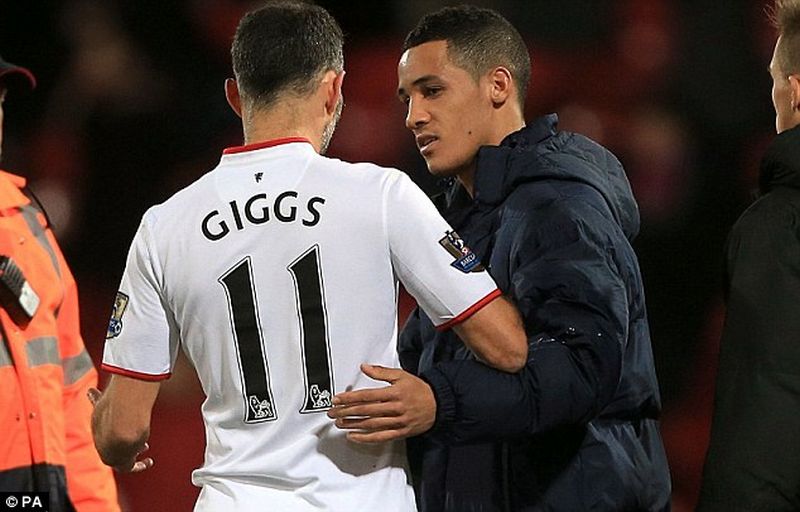 Tom Ince starts to motor when he recalls the best piece of advice given to him by Ryan Giggs. It explains as much about the Derby County player as it does Manchester United’s assistant manager.

Giggs was a lodger at Paul Ince’s house when Alex Ferguson, pre-knighthood, sought to curb the emerging winger’s partying ways in the early 1990s.

‘I don’t know why Fergie looked at my dad to sort that out!’ Ince says, laughing. ‘They have a good bond; the famous goal celebration they had. Ryan has been someone I can speak to other than my dad.

‘My old man is constantly on at me because he wants the best for me. Sometimes it is nice to hear from someone who is a neutral and played in a similar position, with a similar build.

‘The biggest thing Ryan gave me is that you should never change your game for anyone. You are who you are and you play the way you do.

‘Me being an English winger — there are not many about. We’re used to seeing 4-4-2 with high-flying wingers, but as more foreigners come into the game you see the 4-3-3 system more.

‘That is probably the criticism of United now — you are not seeing the old ways of Giggs and Andrei Kanchelskis, Lee Sharpe and Cristiano Ronaldo.

‘But Leicester are proving that 4-4-2 can work. If you can get an out-and-out wide player, who gets his feet on the chalk and goes at people, that excites fans.’

Ince speaks as he plays, quick and direct. His words tell of a 23-year-old thoughtful about the game and also provide a glimpse at what Giggs may be thinking while observing United from the dugout this season.

The pair come up against each other at the iPro Stadium in an FA Cup fourth round tie that Ince describes as a ‘free hit’ for a side prioritising promotion from the Championship.

Although oddly an Arsenal fan because he idolises Thierry Henry, Ince’s history with United dates back to his days as a toddler, living on the same street in Bramhall, Stockport as Steve and Alex Bruce, and Peter and Kasper Schmeichel.

‘We used to kick a ball around in the lounge at Old Trafford,’ Ince remembers. ‘Kasper was the goalkeeper — and he’s gone on to become one. That is down to me, putting a few in the top corner! Kasper looks the same now as he did then!’

Ince continues, joking: ‘The only time I remember encountering Fergie was when my dad was managing MK Dons and he came into his office afterwards.

‘I must have gone straight past him as a kid but I remember seeing him this time and he had a glass of red wine in his hand. My dad said, “That’s why his nose is so red!” My dad said he was a great man, a real inspiration to him, by far the best manager.’

Ince finally looks at home with Derby after a nomadic period without much success at Crystal Palace, Hull and, briefly, Nottingham Forest. He joined in the summer for £4.75million following a prosperous loan spell last season that brought 11 goals in 18 games.

He feels he was ‘not given a fair crack of the whip’ at Hull but bears no grudge with Bruce, his former neighbour.

Ince’s career is marked by bold decisions. Aged 18 he decided to leave Liverpool to gain first-team football, and burst into the national glare at Blackpool. In 2014 he declined a contract offer from Inter Milan to move instead to Hull in the Premier League. Then in March last year he angered some by opting out of playing for England Under 21s.

‘I felt the aftermath was very harsh,’ he explains. ‘I had represented England at all levels and been to an Under 21 European Championship before with Stuart Pearce. At the start of the 2015 qualifying campaign I said to Gareth Southgate, “I’m more than happy to bring the experience”. But as time got on there was a younger group coming through and I wasn’t really involved.

‘I said to Gareth, “No disrespect but I’m in limbo here. I’m two years older than the rest of the boys. I feel they have a great opportunity to play in the Championship.”

‘He understood but when it came out it was almost as if I’d turned my back on England. My dad’s taken the country to a World Cup. It runs in my blood as well.’

Ince’s relationship with his father is tight. Nevertheless, he admits to the conflicting nature of continuing that lineage.

‘It’s a heavy name to carry,’ he says. ‘He’s played at the highest level and people will always compare me. That irritates him more than me.

'I’m proud to have the name on my back. It helps that I’m a different player. I don’t get sent off as much as him! I’m not hard-tackling and mouthy.’

John Lyall, the iconic West Ham manager, was a defining presence on Paul, who came from a tough upbringing and was once visited at training by the law.

‘He was just breaking through,’ Ince says. ‘The police said, “Paul Ince has been in a bit of a scuffle last night”. My dad was panicking, he knew it was either this life or that life.

‘John Lyall made him paint the training ground gates for a month — he had to come in at six every morning — and from then on he took him under his wing and made him aware of the talent he had.’

In 2012-13 Ince Jnr realised his own talent, being named Football League young player of the year. ‘Blackpool was a great time for me,’ he says. ‘Ian Holloway was like, “Go and express yourself”. He’s a fantastic man, very in his own style.’

It is only now that we are seeing more of that, with another eight goals coming in 26 games this season under Paul Clement.

Derby have struggled in recent games though, beating only Hartlepool in their last six games, and owner Mel Morris, who has spent more than £22million on improving the squad, took the unusual course of visiting the dressing room after the draw with Reading to voice his opinion.

‘I’ve never experienced that before,’ concedes Ince. ‘The owner is a big part of this club, he has spent a lot of money and he wants this club to be successful. I’m sure he hasn’t come down with any bad intention, he has come down to try to get that sense of, “Come on, I’m with you, I want you to do well”.’

Victory against United would certainly represent doing well. Ince is looking to use Giggs’ words of wisdom again. ‘It is a chance for the whole of Derby to enjoy it and the players to go out with freedom.’