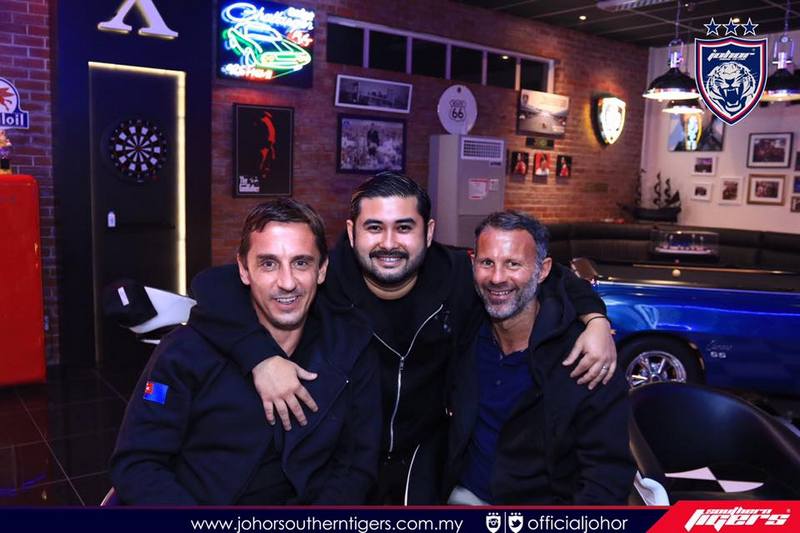 Holding a seven-point lead at the top of the table, the Southern Tigers will seal an unprecedented third consecutive Malaysia Super League (MSL) title if they can account for the Turtles.

So, the visit of two of the graduates from United's revered Class of '92 was timely, as the English Premier League icons looked over JDT's state-of-the-art training facility in Padang Gelam.

Giggs and Neville also met the Southern Tigers' Crown Prince owner to "discuss JDT's football visions and directions, as well as exchange opinions on various football topics", according to the club's Facebook page.

The cash rich outfit have collaborated with Borussia Dortmund and Valencia, while the Crown Prince, also known as TMJ, has embarked on tours of Barcelona, Paris Saint-Germain and Real Madrid.

Neville is a former head coach of Valencia while Giggs is tipped as a possible future manager of Manchester United, despite leaving the club in the summer after the arrival of new boss, Jose Mourinho.

TMJ is a lifelong Manchester United fan, who has watched the Red Devils' progress with interest this season, having won their opening three league games.

JDT are looking to dominate Malaysian and Asian football in the same way that Manchester United have their mark in Europe. The Johor outfit have have already won the Charity Shield and FA Cup this season, and are on the verge of an unprecedented quadruple success if they also retain the AFC Cup.

Mario Gomez's men will play Hong Kong side South China in the two-legged quarterfinals of the regional competition on Sept. 13 and 20.