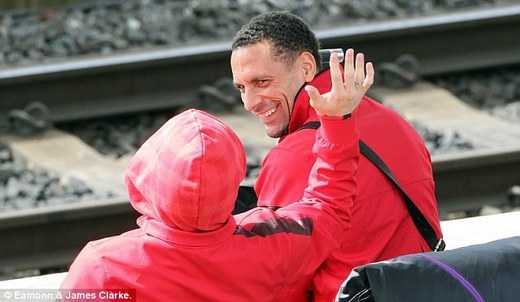 Manchester United defender Rio Ferdinand has confirmed he wants to extend his career at Old Trafford but has no plans to mimic the remarkable longevity of team mate Ryan Giggs.

Ferdinand is out of contract this summer but will be offered a one-year deal by the Barclays Premier League leaders.

The 34-year-old looks set to ignore overtures from China and America to sign up again but has admitted that he has no chance of extending his top-flight career into his late 30s like Giggs.

Ferdinand said: ‘I’m just enjoying my football, playing in the big games, being a regular in the team. It enables you to hit a bit of form. I hope I can carry on.

‘When you get to my stage you take it year by year. I’m working out my routine.

‘But no-one else will be able to do what Giggsy has done. He’s got a certain body type, works on it and gets the best out of it.’

He added: ‘We’ve got to make sure we finish the season correctly and get this title back. We’re not far off it but it’s not over until it’s over. We have to make sure we remain focused and apply ourselves in the right way.

‘I’m not really surprised by the lead if I’m honest. When I look around the changing room I expect us to be  winning games nine times out of 10.

‘I believe in the squad, believe we can win games in various ways,  winning ugly, playing fluent football, keeping a clean sheet.

‘It would be great to win it again but until we do I don’t want to talk much about it. Last season a lot of people got ahead of themselves.’

West Ham boss Sam Allardyce used the arrival of Sir Alex Ferguson to highlight the managerial pressure at the other end of the table, saying: ‘I could get sacked in six months next season or less. If results don’t go our way and we start the season poorly then I am more likely to get sacked than stay here.

'That’s life in football now. Tony Pulis is under pressure at Stoke. People are calling for Tony’s head, which is a sad state of affairs. The more popular football gets, the more the patience and loyalty run out.’