Dai Greene: If I win Olympic gold I'll have Ryan Giggs to thank 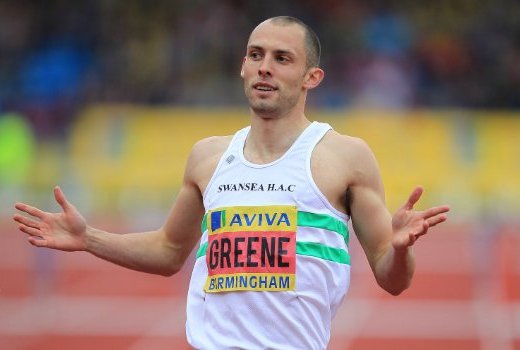 Dai Greene is delightful company. Talking to him fresh from training, he’s packed with stories about playing with his dog Buzz, and funny reflections on his life in sport. He’s also the reigning world and Commonwealth 400m hurdles champion, and one of the finest athletes of his generation. Despite scraping through to the final in fourth place in his semi-final on Saturday, he’s among the hot tips to take Olympic gold.

Does that create extra pressure? “The pressure you have as an athlete is pressure you put on yourself. I know that’s a line that sportspeople always say, but it’s true. I really want to win; that’s where the pressure comes from. And if I do win, you know who I’ll have to thank? Ryan Giggs.”

“I’m right-footed,” he continues, confusingly. “When I was younger I wanted to be like Giggs, who’s left-footed. So me and my brother would dribble the ball round the garden and I’d always use my left foot, just like Giggs. It got to the stage where I was just as good off my left and right. It’s one of the biggest strengths you can have.”

But if it looks as if Greene has had it easy, don’t be fooled. He has had to battle his way to the top of his sport, because he suffers from epilepsy. He now manages the illness without drugs, just by training hard, eating well, and avoiding alcohol and late nights. “When you’re training for something like the Olympic Games, working hard and getting lots of sleep is all you can do anyway, so I’m living the perfect life for dealing with epilepsy as well as for being an Olympian.”

When he runs in the Olympics, his priority will be to win gold, but along the way he admits that he’s also keen to beat the record that has been held by Kriss Akabusi since 1982 and become the fastest British man over the 400m hurdles. “There’s very little in it. Every time I see Kriss, we joke about how he needs to enjoy being British record holder while it lasts, because I’ll soon take it from him.”