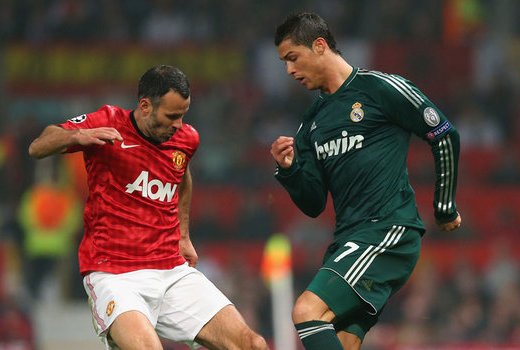 Real Madrid stars have been queuing up to praise Ryan Giggs - with Cristiano Ronaldo joking he'll play on until he's 50.

Giggs was among Manchester United's most impressive players as they bowed out of the UEFA Champions League with a 2-1 defeat to Real on Tuesday.

And the 39-year-old's display, on the occasion of his 1000th senior game, even wowed his opponents.

"Giggsy is going to finish when he's 50 years old!" said Ronaldo, quoted in the Daily Mirror.

"He's an incredible player. He's still fit and still playing in this kind of game. It's unbelievable. Giggsy is the flag of his club and I'm happy for him."

Ex-Liverpool midfielder Xabi Alonso also lined up against Giggs and spoke glowingly of the veteran for the manner in which he took responsibility on the pitch.

"He is a great example for all football players with the way he behaves on the pitch and the way he plays," said Alonso, quoted in the Daily Express.

"He did great, even when they were in more difficult positions, he took the responsibility to pick up the ball and take it forward."