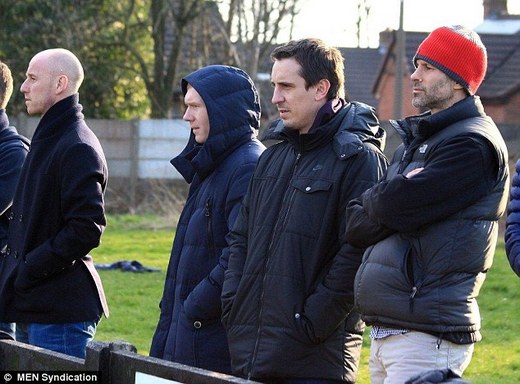 For the Class of '92 stars are set to turn out in a pre-season friendly against Salford City, the non-league club they recently sealed a deal to take over.

Ryan Giggs, who is expected to hang up his boots at the end of the season, could also feature for the 'Class of 92' XI against Salford City on August 7.

No further details have been revealed but the fixture has been moved from the club's cramped Moor Lane ground to the 12,000 capacity Salford City Stadium.

The announcement raises the prospect of David Beckham, another graduate of the Class of '92, also coming out of retirement to play in the game.

Sportsmail had revealed that Neville and Giggs – along with other members of Manchester United’s famous ‘Class of ‘92’ – were looking to make a financial commitment to the club in a bid to boost the recruitment of talented young footballers in the area.

The quintet had been spotted on the sidelines for the eighth-tier side's match against Curzon Ashton at Moor Lane.

Giggs and Gary Neville own a restaurant together, Cafe Football at Westfield Stratford City.

After performing at the highest level as players, both are now establishing themselves as coaches, with Giggs a player-coach at United and Gary Neville an assistant to England boss Roy Hodgson in addition to his work as a Sky Sports pundit.

Both have a noted interest in youth development and supporting their local area - Neville was born in Bury and lives in the vicinity while Giggs lives in Worsley to the west of Manchester..