Carragher envious of Giggs and Scholes 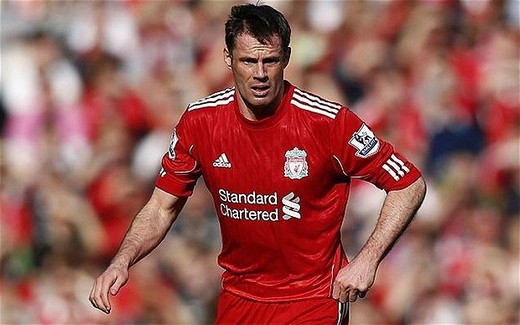 Liverpool's Jamie Carragher says he is jealous of the success of Manchester United pair Ryan Giggs and Paul Scholes as the veteran defender reflects on a career without a league title success.

With just a year remaining on his current deal at the club and his influence on the wane, the 2012/13 campaign looks likely to be Carragher's last as a professional.

And upon reflecting on his career, the 34 year old says that while he doesn't fully regret having not claiming a domestic title, he does envy the success of United pair Giggs and Scholes, who between them have 22 league winners medals.

"I'd love to have won the league for Liverpool as it's been so long," he said. "But were we ever really good enough? We never threw it away. There was always someone better than us.

"But I played for my team my whole life and I've been one of the main players in what we've done. I could have won the league going somewhere else and just playing 25 games.

"I'm good enough to have won the league. I'm not trying to sound big-headed but more often than not we've had one of the best defensive records each season."

Along with 38 England caps, Carragher has helped Liverpool to multiple domestic cup and European successes, the crowning moment coming in Istanbul in 2005 when Steven Gerrard's heroic performance helped the club overcome AC Milan in the European Cup final.

Those achievements, along with Carragher's 704 appearances for The Reds; the second most in the club's history, means such is his status as one of the Anfield club's greatest ever players, he's unlikely to move to pastures new when his contract expires at the end of the current season.

"It always saddened me when Raul left Real Madrid. I just thought, 'He is Real Madrid'. It doesn't look right. It's special when you've played for one team," he added.

"It [retirement] doesn't worry me," . "It's not that I'm thinking, 'Oh I'm devastated about it'. Probably when I stop playing, I'll feel that a bit more. But when you play for such a big club for so long, it's intense every single day and I've probably had that for 16 or 17 years.

"But being a local lad playing for Liverpool is intense. And it's not just on match days, it's every single day. But that's because of the club you play for and that's the price of the ticket, that's what every player wants."