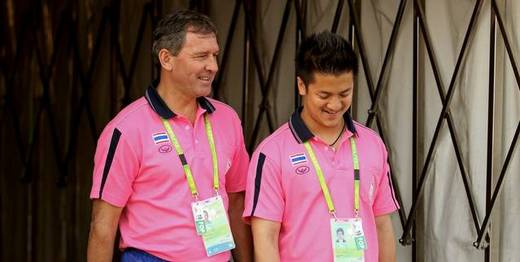 Ryan Giggs could stretch his amazing one club career and still be playing in the Premier League when he turns 40.

That’s the belief of Bryan Robson who once shared a dressing room with a skinny young Giggs, but now marvels at the staying power of the player who broke Sir Bobby Charlton’s Manchester United appearance record.

Robson said: “Ryan will be 38 in November and for me there’s no doubt he can go on for a few more years yet.

“He’s got the desire – that’s why he’s won as many things as he has in his career.

“When I saw him as a 17-year-old when he first came in he had unbelievable pace, stamina, and that hasn’t changed much.

“He won’t put weight on and he’s a fitness fanatic. He also has an incredible mentality to keep going and keep winning.

“He has more of a temper than you’d think. He’s mild-mannered, but when he really thinks something, he can snap and have a right go at people.

“You need that edge. You have to care and have a bit of edge to be a top player.”

Robson added: “If you have a lot of those personalities ­together now and again you’ll have a ruck and they can clash, but it’s ­always been an essential part of having a team with the ­hunger to win things.”