Britain's Welsh duo could be key to success

July 28, 2012
Posted by Steven Tan | Source from The Associated Press 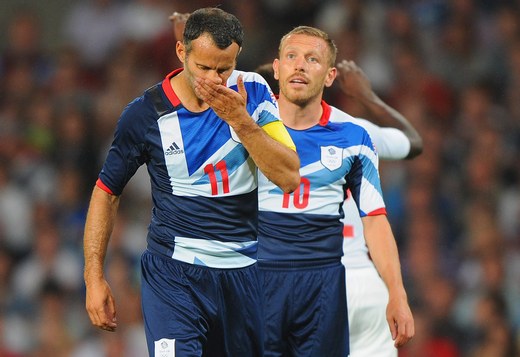 One game down, and Britain's hope for soccer success at the Olympic Games appears to rest in large part on captain Ryan Giggs -- a Manchester United stalwart gunning for international glory to cap a glittering domestic career.

The 38-year-old Giggs has won just about everything for United, but has never qualified for an international tournament for his native Wales. Thursday's opening draw against Senegal showed him winning a medal in Britain's first Olympic competition since 1960 will be not be easy either.

"We are going to have to improve if we are going to get through the group," he said after the bruising match at United's Old Trafford stadium. "We'll definitely have to win one of our next two games to have any chance of getting through."

Fellow Welshman Craig Bellamy scored Britain's opening goal off a Giggs free kick, and the men were behind most of Britain's best moments.

In the second half, Giggs threaded a ball through to Bellamy, who was brought crashing down by a Senegalese defender. Britain was convinced a penalty should have been awarded.

"Those two will be absolutely crucial to the group, not just on the pitch but what they can offer between now and the kickoff on Sunday," said Britain coach Stuart Pearce, who has had less than three weeks to cobble together a team. "They are going to be vital over this tournament for us."

Britain plays United Arab Emirates on Sunday at Wembley, a match it must win to stay on track to make it out of the group stage. The UAE impressed against Uruguay on Thursday, before losing 2-1 to its fellow Group A team.

Olympic men's soccer is an under-23 competition, but teams are allowed three players over that age. Giggs and Liverpool striker Bellamy -- along with Manchester City defender Micah Richards -- are the older players in Pearce's 18-man squad.

Giggs is one of the most respected players in Britain, having won 12 Premier League titles, five FA Cups and two Champions League trophies with United. He earned 64 caps for Wales, but the team never made it to the European or World Cups. Bellamy is the captain of the Welsh national side.

Until Thursday, Britain had not fielded an Olympic team since the 1960 Games in Rome because soccer federations in Scotland, Wales and Northern Ireland feared doing so could one day lead to them being pushed out of FIFA.

With calls for a Britain team to play on home soil, FIFA assured the associations their status wouldn't be affected by participating in the competition. Giggs is one of five Welshmen in the team, but there are no players from Scotland or Northern Ireland.

The buildup to the competition had been met with cynicism and suspicion by some, who questioned the need for a British team at all. But a noisy, near capacity crowd at Old Trafford and a decent first-half performance silenced some of the critics.

Still, a poor result on Sunday could spell the end of Britain's flirtation with "Team GB."

"The great thing about football is that we have another game coming up soon and we will get fitter as this tournament goes on," said Bellamy, who sustained a slight injury but should be fit for the next match. "We have to stay in this tournament."