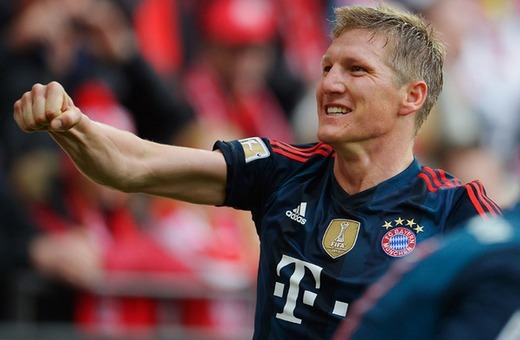 Bastian Schweinsteiger has praised Manchester United's Ryan Giggs for his longevity, and claims that he wants to finish his career at Bayern Munich.

Giggs has been at United his entire career and has won a host of trophies, including the Premier League 13 times, the FA Cup on four occasions and the Champions League twice.

Even at the age of 40, the Welshman is considered a key figure for the Red Devils and was appointed as a player-coach by manager David Moyes when he succeeded Sir Alex Ferguson at Old Trafford last summer.

Schweinsteiger has now said that he could follow the examples sets by Giggs and Roma forward Francesco Totti and remain at Bayern for the remainder of his career.

"Can I be compared to Francesco Totti or Ryan Giggs? Yes, absolutely," the 29-year-old told France Football.

"They are two amazing players. At 40 years of age, Giggs is still going on playing at highest level. He is remarkable.

"I am proud to have been at just one club. Were there any moments I was close to leaving? Yes, several times. But in the end the heart made the decision.

"Will I terminate my career at Bayern? It is impossible to reply.

"Here I am more than happy, but there could be surprises in the future. Moreover, I still have a few years to go on playing."

Schweinsteiger is considered one of the best players in the world and was an important player in Bayern's Champions League triumph last season.

However, the Germany international believes it is unlikely he will ever win the FIFA Ballon d'Or.

"Do I dream about the Ballon d'Or? As a defensive midfielder, my chances to get that award are thin," he said.

"You have to be realistic. The trophy is rather made for decisive players like Lionel Messi, Cristiano Ronaldo or Franck Ribery. People remember those players."