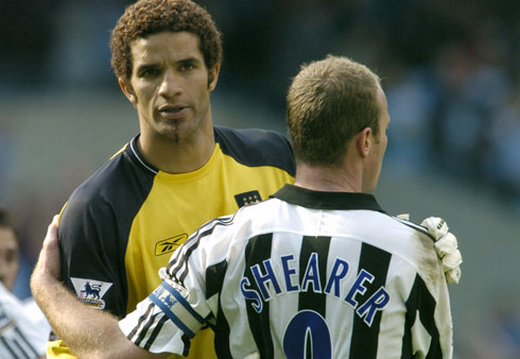 At a ceremony in London on Tuesday to help celebrate the 20th anniversary of the Premier League, prizes were given out for top goalscorer, record clean sheet holder and top appearance-maker.

Former Blackburn Rovers and Newcastle United striker Shearer leads the goal charts with 260, ex-Manchester City and Portsmouth keeper James has 173 clean sheets and Giggs is out in front on 598 appearances for Manchester United.

Shearer was delighted to pick up his trophy, but said he expects his milestone tally to be overhauled one day and tipped Man Utd striker Wayne Rooney to go close.

"Can I remember the goals? Every single one," said Shearer. "I think my best was the volley against Everton for Newcastle, but my favourite was the first one I scored for Newcastle because it was always my dream to play for my hometown club.

"If Mr Rooney continues his goalscoring he won't be far away from breaking the record. I'm sure it'll be beaten one day but I'll enjoy it while it lasts.

"It's not only down to you but your strike partner and team-mates because without them there wouldn't be any chances. I've always been lucky to play in attacking systems and with teams that want to score goals.

"You have barren spells where you wonder where the next goal will come from, and confidence is very important for strikers.

"But once one came usually some more followed."

James said it was a real honour to have more Premier League clean sheets than some of the greats that have kept goal in the last 20 seasons.

"I'm obviously delighted," he said. "I'm honoured just to be able to contest it, and to still be the record-holder having not played in the Premier League for a couple of years is fantastic.

"There's so many great goalkeepers at the moment and so many have played in the Premier League down the years, the likes of Peter Schmeichel, David Seaman and so on.

"My favourite save was one for Manchester City against Chelsea in February 2005, it was a Frank Lampard volley and I stuck my arm out and deflected it away.

"Highlight of playing in the Premier League? I loved it all."

"He's a fantastic player and a fantastic person and it's been incredible for us to have him with us for so long," said Gill.

There were 300,000 fans who voted in the Premier League 20 Seasons Awards casting over 4.2m votes in five categories: Goal, Match, Save, Goal Celebration and Fantasy Team of the 20 Seasons.