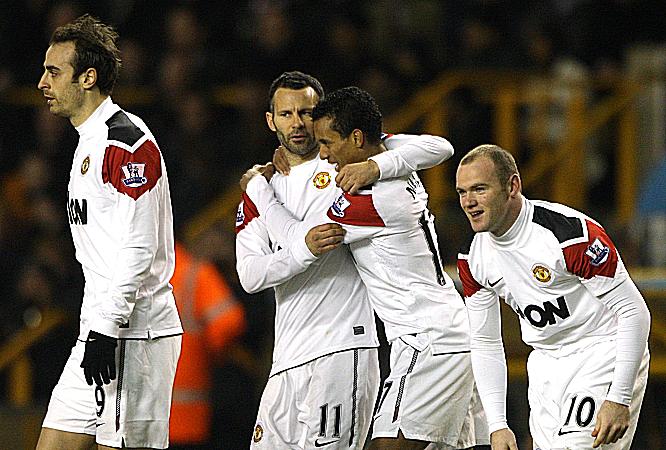 United's long unbeaten Premier League run was halted in unexpected circumstances, as relegation-threatened Wolves came from behind to win at Molineux.

Nani gave the Reds a dream start, firing home the opening goal inside three minutes, but by the interval the hosts had made their set-piece prowess tell, as headers from George Elokobi and Kevin Doyle turned the scoreline on its head.

A disjointed display from the Reds rarely looked like yielding an equaliser, as Mick McCarthy's dogged side defended stoutly, tore into challenges and ran the clock down as if their very survival hinged on it.

United's pre-match preparations were dealt an untimely blow when Rio Ferdinand suffered an injury in the warm-up. His place was taken by named substitute Jonny Evans, while Chris Smalling took his berth on the bench.

Nevertheless, the Reds might have taken to the field with an added spring in their step, after learning of Arsenal's dramatic collapse at Newcastle. By the same token, Wigan's win over Blackburn further entrenched Wolves in the relegation mire.

Perhaps mindful of their plight, the hosts went at United from the off, and heavy pressure culminated in Nenad Milijas blasting over Edwin van der Sar's bar inside the first minute. On a day in which the Premier League was saturated with goals, it was perhaps unsurprising that the deadlock was soon broken.

Darren Fletcher fed Nani with a raking pass, and the Portuguese winger teased Elokobi on the right-hand side of the area, feinting to cross before checking back on his left-footed and unleashing a rasping left-footed effort inside Wayne Hennessey's near post.

Eager to build on that electric start, United maintained the pressure, with Fletcher and Michael Carrick keen to pass positively wherever possible. A second goal should have arrived when Berbatov ferried Fletcher's pass to Rooney, but the striker's volley was comfortably caught by Hennessey.

More incisive play culminated in Nani shooting straight at the Wolves goalkeeper, but the game's flow was quickly - and dramatically - arrested on 10 minutes. A quickly-taken corner from Jarvis caught United napping, and the unmarked Elokobi was on hand to powerfully head past van der Sar.

Buoyed by their quick riposte, and fuelled by memories of eye-catching wins over Chelsea and Manchester City already this season, the home support cranked up the volume. Wolves' players responded by redoubling their own efforts, allowing United no time at all in possession.

The Reds' flow was affected, but still the better chances fell to the visitors. Berbatov headed Nani's cross onto the roof of the net, then stabbed a shot straight at Hennessey, before Nani's free-kick cleared the crossbar by a matter of inches.

Having gained a foothold in the game, however, Wolves soon began to exploit apparent absent-mindedness from United at set-pieces. Another half-cleared corner returned to Jamie O'Hara, whose near-post shot was turned away by van der Sar's legs, while Milijas' free-kick deflected narrowly wide.

Shortly before the break, a set-piece again proved United's undoing. Milijas fizzed in an in-swinging cross from the right-hand side of the area, and Doyle diverted Elokobi's header past the rooted van der Sar to whip the home crowd into a frenzy.

Though shell-shocked, United still might have gone into the interval on terms. Rafael's right-wing cross dropped perfectly for the unmarked Nani, but the winger could only plant his header over the bar.

Sir Alex Ferguson used the break to make a tactical change; throwing on Paul Scholes for Carrick, but Mick McCarthy's response was to encourage a deeper approach from his side, who clustered around their own area in steadfast refusal to let United anywhere near Hennessey's goal.

Scholes came close to nabbing a leveller shortly before the hour, but he could only slide a finish off-target after racing onto Rafael's low cross. Soon after, Sir Alex replaced the injured Evans with Smalling, and introduced Chicharito at the expense of Berbatov.

The little Mexican pressured Hennessey into spilling a catch, from which Rooney's follow-up was deflected wide. Otherwise, the changes did little to alter the flow of the game. Wolves displayed great desire and determination and, aided by a superb display of line-leading from Doyle, plus a compact showing of defensive resolve, they rarely looked like letting United back into the game.

The hosts might have been forgiven late jitters, having twice conceded late winners at Old Trafford already this term, but those memories merely galvanised their desire to hang on to three precious points.

For United, there will be no more talk of invincibility or unbeaten records. Internally, there rarely was. Instead, the league leaders have been given a reality check which still provides cause for much optimism.

Edwin van der Sar – The big Dutchman had very little to do, other than pick the ball out of his net twice. Given little protection by his defence for either goal.

Rafael – Put in plenty of effort and played on manfully, despite suffering a painful dislocated finger during the second half, but the Brazilian was unable to provide the telling final ball when United needed it most.

Nemanja Vidic - Given a tough time by Kevin Doyle, who continues to catch the eye as one of the best lone strikers in the league.

Jonny Evans – Thrown into the match in tough circumstances, and was subjected to a constant aerial barrage from the hosts before retiring injured.

Patrice Evra – Hurtled forward at every opportunity and gave his all in pursuit of an equaliser, but endured a frustrating afternoon.

Nani – Head and shoulders above everyone else. A constant danger to Wolves, and opened the scoring with a superb early finish; his ninth goal of an impressive season.

Michael Carrick – Started brightly, with plenty of positive passing early on, but was soon penned back by Wolves' dominant midfield. Made way for Scholes at half-time.

Darren Fletcher -  Another busy display from the Scot, who gave his all alongside Carrick and latterly Scholes, but regularly found himself under heavy pressure.

Ryan Giggs – His quietest game for a while. Rarely managed to get the better of Zubar and, for once, couldn't inspire a second-half revival.

Dimitar Berbatov – The Bulgarian started well enough, linking up well with Rooney and narrowly missing the target with a couple of opportunities. He was sacrificed in the second period in order to introduce Chicharito's pace and movement.

SUBSTITUTES
Paul Scholes  (on for Carrick, 46 mins) – Introduced in order to bring bite and vision to United's midfield, he showed plenty of both but the game had already gone. Booked for a diving handball - Hennessey even saved that.

Chris Smalling (on for Evans, 65 mins) - Although he wasn't even in the squad until 10 minutes before kick-off, Smalling put in an excellent little shift, showing poise and pluck against the fired up hosts.

Chicharito (on for Berbatov, 65 mins) - The little Mexican has been United's get-out-of-jail card so often this term, but not on this occasion. Despite his neat touches and runs, he was never given the clear opening to rescue the Reds.