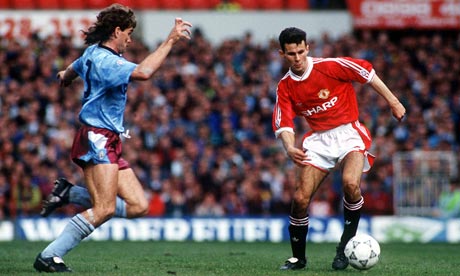 Ryan Giggs made his debut for Manchester United as a 35th-minute substitute in the 2-0 defeat by Everton at Old Trafford on 2 March 1991. But what happened to his team-mates from that day?

Les Sealey
The goalkeeper joined Aston Villa in 1991, before finishing his playing career at West Ham. He stayed as their goalkeeping coach but died from a heart attack in 2001

Denis Irwin
Won the treble alongside Giggs in 1999. He joined Wolves in 2002 and retired in 2004. Now works as a pundit for MUTV and RTE

Mal Donaghy
Joined Chelsea in 1992 and retired two years later. He then had a spell as Northern Ireland's Under-19 coach

Gary Pallister
Joined Middlesbrough in 1998 after several successful years at United. Retired in 2001 he works as a pundit and in 2010 was appointed operations director at former club Darlington

Lee Martin
Retired in 2008 and works helping youngsters gain qualifications and employment in the west Cheshire area. He also coaches Chester FC's U16 side

Paul Ince
Joined Internazionale in 1995. Retired in 2007 and had spells managing Macclesfield, MK Dons, Blackburn, and until 2011, Notts County

Lee Sharpe
Left United for Leeds in 1996 and retired in 2004. Since then has appeared on numerous television programmes, worked as an after-dinner speaker and been involved in other promotional work

Danny Wallace
Left United in 1993 and retired in 1995 after being diagnosed with multiple sclerosis. Set up the Danny Wallace Foundation to raise money to help those suffering from the illness

Brian McClair
Joined Motherwell in 1998 and retired the same year. Has been the director of United's youth academy since 2006