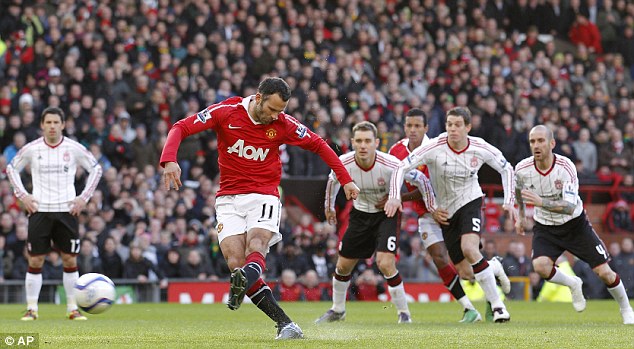 At the close of a dazzling week for football, the mind swims with images of how glorious the game can be.

Arsenal and Barcelona was everything we had hoped for, a volcanic eruption of pace, touch, style and imagination.

A new benchmark has been set and those English clubs who cling to their strong-arm, dull-witted, long-ball banalities may no longer use ignorance as an excuse.

And yet, alongside the deeds of Lionel Messi and the young prodigy Jack Wilshere stands another compelling image.

A left winger, boots dusted by touchline chalk, sidles up to the full-back. He shows him the ball, hesitates for half a second, drops a shoulder, flicks with the outside of his left boot, then challenges him to a foot race.

Anticipation gives him half a yard's grace and natural sprinting speed takes him to the byline to strike his searching cross.

The manoeuvre would be admirable in a teenager. In a man of 37, it beggars belief.

Ryan Giggs brought off this trick within the final 10 minutes of a spirited Manchester derby.

It did not have the feel of a predestined tactic, instead, it seemed entirely spontaneous. Given that situation, that is what he does.

That is what he has done for the past 20 years.

And still he has the skill and the speed to make it work.

Wayne Rooney's aerobatics quite properly claimed most of the attention last weekend, and we shall wait for many a season to see the equal of that little extravaganza, yet still the Giggs cameo would not be banished.

The ferocious intensity of the modern game decrees that 37 is an age for carpet slippers and wistful reflection and the occasional stint as match-day meeter and greeter at the Theatre of Dreams.

And of course, he has. I have no idea how he does it.

He sets great store by the yoga exercises he adopted eight years ago and there may well be something in that.

Others, more simply, point to his remarkable self-discipline, his disdain for the celebrity lifestyle - 'Why does anyone need to know anything about my private life?' - and his rejection of the fleshpots of Manchester.

In that sense, he appears an uncomplicated man: he recognises his own qualities, works hard to preserve them and listens to what his body is telling him.

But that seems too simple.

The sheer intensity of today's game makes physical demands which most of us could not begin to comprehend.

And yet, week after week, season upon season, decade after decade, Giggs remains central to his club's success.

It is that appetite for achievement which lifts him high above the commonplace.

His reputation is secure and his untold millions are long since made, yet his own motivation drives him on.

By the time this championship season has run its course, Giggs should have accumulated his 12th title.

To mark the milestone, he has just signed a one-year extension to his Manchester United contract. You sense that even Sir Alex Ferguson is a little in awe of his protege.

'A marvellous player and a wonderful man,' he says. 'You run out of words to describe him.'
In time, we shall debate his place among the great ones of his game.

But for the moment, there are young defenders to be outstripped and new standards to be set.
For that is what Ryan Giggs does. And he still has a lot to offer.