WATCH: 'He is the man!' - Van Gaal backs Giggs to be Manchester United's next boss 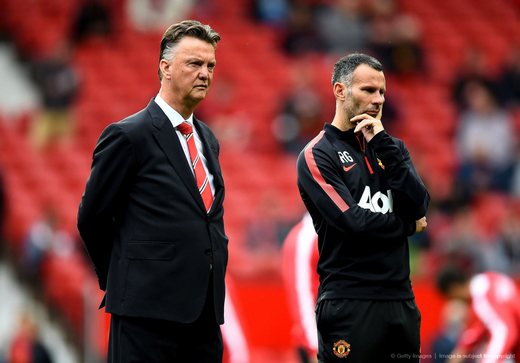 Louis van Gaal has lavished assistant Ryan Giggs with praise and revealed that he believes the Welshman could succeed him at Manchester United.

The Dutchman was speaking at a dinner held in Giggs' honour at Old Trafford last week, and described his number two's way of working with players as "a miracle".

Van Gaal also insisted the former Reds midfielder is "the man" to take the reins when he eventually steps down in an entertaining speech.

And the manager went on to reveal that he has been impressed by Giggs' personal qualities since the two linked up over the summer.

OLD TRAFFORD, THURSDAY SEPT 25
"I am wandering the streets in the evening because I have to spoil my woman [LAUGHTER]. I am wandering the streets to pick out a restaurant in Manchester and in five metres I can walk and then 'I want a picture of you'. Then I say 'five points out of five matches?'. 'But we have confidence in you' [CHEERS].
"Because it is a great position, also, I have to admit it is not simple but I want to speak to you to give my promise that I shall do my utmost best and I have to say that all the players are doing their utmost best. I am very pleased with the behaviour of my players but I am more pleased with the guest of honour tonight (Giggs).
"I want to explain it. Because I am a popular coach, I put him in the centre of attention tonight but he doesn't need it, he doesn't need it. But I am a coach who has given a lot of trainees in my period of manager training clubs, and in two months I have seen a human being, because I am always seeing not a training coach or a manager or a player, I see the human being. Today I have said in the press conference that we can make errors and we have to train, work and then we shall improve.
"But I have seen a lot of trainees and I have thought that Ryan Giggs is a trainee but he isn't a trainee, he is an exception. I have seen a lot of trainees and I am very happy with him because he has showed already that he can communicate with the group in front of him. And I have seen that he can explain what - how do you say in English? - what is the issue of the training session. And he can say it in a different way, which is a miracle because not so many ex-players can do that. But not only that, Ryan, you are in my opinion a very nice guy and that's for me the most important thing. Of course I admired Ryan Giggs as a player, maybe much more that you do [BOOS. VAN GAAL LAUGHS].
"Because I do know now I've 'enticed' (provoked) you. I learnt that word off Mr Ryan Giggs. But he is so modest, so normal, and he is such a great star [APPLAUSE]. No, no, no, you have to listen. Because he is the star of the evening and really deserves that and I am convinced that you are - how do you call it in English? - 'Ok, this Van Gaal is over, he (Giggs) is the man!' [LOUD CHEERS]."