van Persie: I want to go as long as Giggs 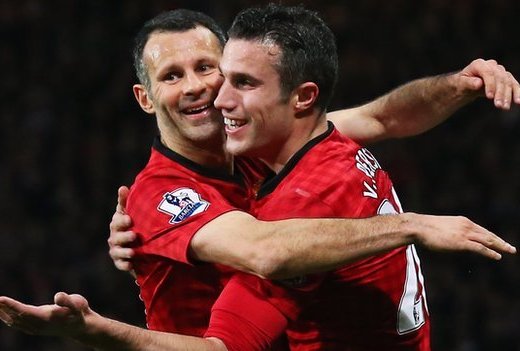 And the Dutch striker has revealed he wants to emulate Ryan Giggs and play on into his 40s.

Moyes was shown round United's state-of-the-art training facility by Sir Alex Ferguson and David Gill on Monday in his first, unofficial, act as the champions' new boss.

Van Persie will be key to Moyes' plans, after winning the Premier League's Golden Boot with 26 goals.

And he is confident it will be a smooth transition of power in the dug-out - and he is adamant United will continue to challenge for silverware under Moyes.

He told the Daily Mirror: 'This is a great bunch of players. Everybody wants to work for each other and share the success.

'I'm 100 per cent sure we will play for trophies every year and, hopefully, win a few every year. That's our standard for this team.

'This is a great team and, hopefully, we can go for even more trophies. I'm sure we can.

'Of course, we get a new manager next year and everybody is looking forward to that.

'It's a new challenge for everyone. We'll have a nice break now and then we go again.'

Van Persie, 29, also claimed he wants to follow in the footsteps of Old Trafford golden oldies Giggs and Paul Scholes by playing well into his 30s.

Scholes retired on Sunday at West Brom aged 38, while Giggs is carrying on next season - which will take him past 40.

'Watching Scholesy and Giggsy and the way they look after their bodies - they are true examples for young and old, and that's what I want as well.'