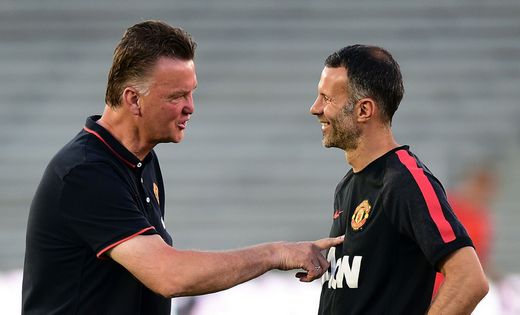 Louis van Gaal has praised the work of assistant manager Ryan Giggs, whose famed attention to detail and unrivalled knowledge of the club has proven indispensable during the Dutchman's early endeavours as Manchester United boss.

Giggs brought an end to his legendary playing career in May and was immediately hired by van Gaal, who was keen to retain at least one member of staff from the previous regime. As the 62-year-old explained during an exclusive interview with MUTV, his decision is paying dividends.

“First of all, we have my assistant manager Ryan Giggs and I’m very pleased with him,” van Gaal said, when discussing his staff. “I talked with him before I signed. Your first impression is always important and that was very good, and now the impression is still improving because I know him better.

“Also, he’s working very hard, as are all my assistants. It’s important that they don’t have a job that’s 9-5. You have to work very hard when you’re my assistant – it’s not always a pleasant job. But he’s doing very well and I’m happy he’s on my staff.

“So I always pick up trainer-coaches from the last season; at Barcelona I did that with Jose Mourinho, at Bayern I did it with Hermann Gerland and now it’s Ryan Giggs. Therefore, I’m very pleased because he knows everybody, he knows the culture better than anyone working at Manchester United, I believe, so I’m very pleased he is in my staff.

“The staff are more important than the players. It’s unfortunate for the players that I say that but you have to implement a philosophy and therefore you need staff who can give me the confidence that they’re doing the things I require.”

Van Gaal is notably pleased by the way the players are responding to his methods, which currently involve double training sessions that are designed to build fitness ahead of the much-anticipated new season.

“They are hard-working players,” the manager said. “They are focused and that’s very important to me. I enjoy working with them and that’s much more important than you can imagine.

"When I see them doing the exercises that I and my staff require, they respond very well and they’re disciplined, and I like that because we need discipline on the pitch when we play a match.

“It might not be what they’re used to but double sessions are normal for me. I have the impression that, for some players, it’s very difficult.

"We have different players now because we have played with non-World Cup players for two weeks and now we have the World Cup players, from England for example. They have to adapt to the level of what is required now.”