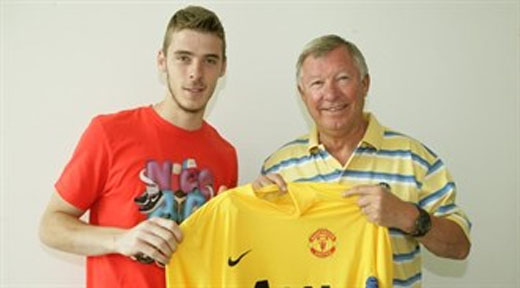 United have confirmed a third new signing of the summer after reaching agreement with Atlético Madrid for the transfer of David de Gea.

The 20-year-old goalkeeper passed a medical this week and has agreed a five-year deal with the club.

“I feel very proud and I can’t wait to start playing here,” said De Gea in an exclusive interview with MUTV, to be shown on the channel at 18:30 BST today.

“When a club the size of Manchester United comes in for you it obviously makes you very, very happy.

"I saw their interest as an extra motivation to work even harder to show off my ability.

"It’s a great privilege to be part of a club like United and I'm keen to do my best and show what I can do.”

De Gea follows Phil Jones and Ashley Young in signing for the Reds and will join up with his new team-mates next month.

The young stopper, who was part of Spain’s victorious squad at the UEFA European Under-21 Championships last weekend, came through the ranks at Atlético before making his senior debut as an 18-year-old in the Champions League clash with FC Porto in September 2009.

He helped Atlético win the Europa League later that season and the 2010 UEFA Super Cup, and occupied the No.1 spot on a regular basis last season.