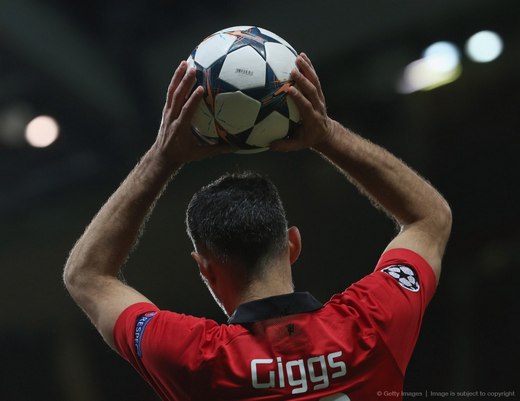 Ryan Giggs received a glowing tribute from his Manchester United team-mates after producing an instrumental 90-minute display in the 3-0 win over Olympiacos on Wednesday night.

Almost a month after his last Reds outing and on his 150th Champions League appearance, Giggs had a hand in the first two goals at Old Trafford and was as fit as any other player on the pitch.

It led to manager David Moyes labelling him a "freak" after the game, while his team-mates were left shaking their heads in continued admiration.

"What's left to say about him?" said Michael Carrick. "It's incredible to come into a game like that, having not played a lot of football recently, and get through it physically – it shows how he looks after himself. His ball for Wayne [Rooney] for the second goal was typical of him. He can still do it and it's a pleasure to play with him."

"What’s left to say about him? It’s incredible to come into a game like that, having not played a lot of football recently, and get through it physically – it shows how he looks after himself."
– Michael Carrick

Phil Jones added: "He's terrific. He drives the team forward and the ball for the penalty was exquisite. You can't teach that. He's a great lad as well."

And Patrice Evra said: "The legend, Ryan Giggs... I don't know how many words you can say about his class. I have so much respect for him. He's such an example to me. When I joined this club, a lot of people were talking about Cristiano Ronaldo and Wayne Rooney but Ryan was always my favourite, along with Scholesy and Gary Neville."

Carrick was pleased with the comeback victory over Olympiacos, which came only three days after the disappointing league defeat at home to Liverpool.

"It's a good feeling," he said. "We knew it was possible before the game; we were quite positive and knew we were capable of a performance and a result like that, even after the weekend. We were very down for a couple of days after Liverpool but, at the same time, we knew we had enough to pull it off, so we're happy."