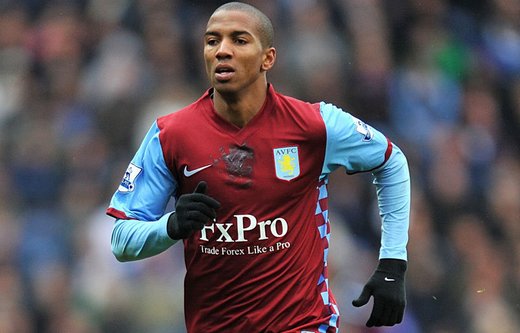 MANCHESTER UNITED are closing in on a £25million swoop for Ashley Young.

And boss Alex Ferguson is set to offer the Aston Villa winger a whopping £100,000 a week.

Young, who starred for England against Wales and Ghana, has already rejected a new Villa deal worth £80,000 a week.

An England insider said: "Him moving to Manchester United was the talk of the dressing room.

"You can see why United want him."

But he has long been a transfer target for Liverpool and Tottenham.

Now Fergie has entered the race for his signature and hopes to entice him with a massive pay hike.

United also have the advantage of being the only one out of the three clubs that can currently guarantee Champions League football for Young next season.

Stevenage-born Young moved to Villa Park for £9.75million in January 2007 and has scored 29 goals in 149 Premier League appearances.

He has become a favourite with the fans on the Holte End and also impressed for England this season.

His ability to play either wide on the right or the left and down the middle is attractive to United boss Ferguson, who is ready to make a mega move for the player this summer.

He views the Villa man as a decent long-term successor for 37-year-old Ryan Giggs.