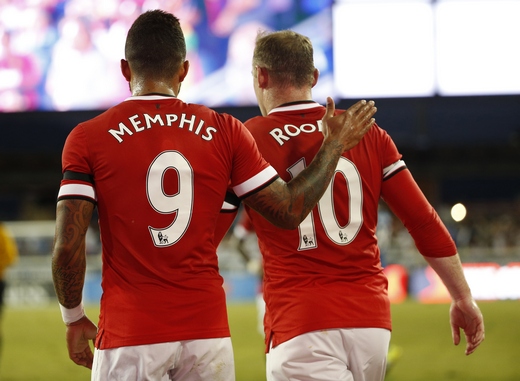 Memphis Depay netted his first Manchester United goal as Louis van Gaal’s men secured a 3-1 victory over San Jose Earthquakes in an entertaining encounter in California on Tuesday night.
The Dutchman’s effort – a calm low finish after he took advantage of a wayward backpass – was sandwiched between efforts from Juan Mata and substitute Andrea Pereira, who also netted his first goal for the senior team at the Avaya Stadium in San Jose.
Van Gaal started with the same team that overcame Club America in Seattle – Sam Johnstone in goal, a backline of Matteo Darmian, Phil Jones, Daley Blind and Luke Shaw and a midfield featuring Michael Carrick, Morgan Schneiderlin, Ashley Young and Mata; Memphis once again sat behind Wayne Rooney up front. 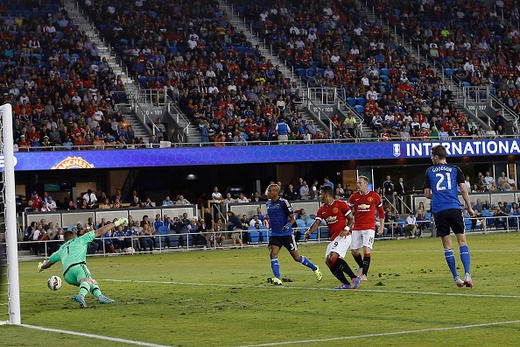 United’s attacking duo were at it from the off with Depay looking particularly sharp. On four minutes the Dutchman powered forward, twisted and turned before seeing his shot parried by David Bingham in the Quakes goal. Rooney looked to pounce, as did Mata but the Spaniard could only find the side netting.
Five minutes later a brilliant run forward down the left from Shaw almost resulted in Memphis' opening Reds strike after a Rooney dummy, but the Quakes just about managed to clear the danger.
The Reds continued to look a threat – down both wings. Shaw and Young combined well on the left, while, on the opposite side, Mata enjoyed some neat link-up play with Darmian who showed his eye for attacking on a number of occasions inside the opening 45.
It was the left side that proved to be the most fruitful for van Gaal’s men as the half drew to a close. Young went on another forward run and pulled the ball back for Mata on the edge of the area. After taking a touch into the box he fired a low shot past Bingham and although Memphis was close to getting the final touch, the goal was given to Mata.
Four minutes later Memphis did manage to get his name on the scoresheet as he capitalised on a loose backpass from Jean Baptist Pierazzi and calmly slotted home. 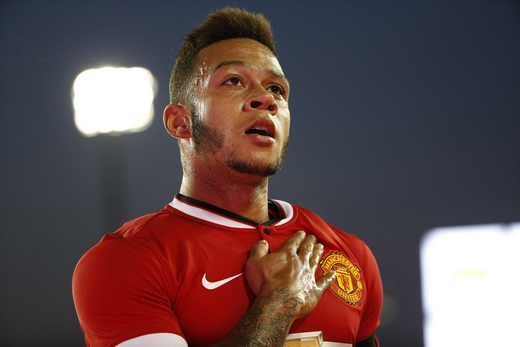 It had been all United up to that point but the Quakes, playing in their home stadium, weren’t about to go down without a fight and three minutes before the break, the MLS side were given a lifeline from Fatai Alashe. His goal – a low sliding finish – came courtesy of an excellent burst down the right and cut-back from Shea Salinas.
After Mata had seen an effort well saved on the stroke of half-time, it was all change for the Reds as van Gaal stuck to his plan of fielding the same outfield players who came on for the second half at CenturyLink Field, although Johnstone remained in goal due to fitness concerns over David De Gea and Anders Lindegaard. There was one slight tactical tweak with Adnan Januzaj moving out to the left allowing Pereira to take up the no.10 role the Belgian had played in against Club America. 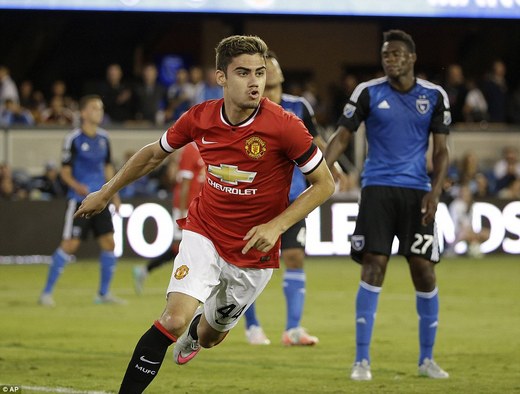 And it was Pereira who restored the Reds’ two-goal advantage just after the hour mark with a fine headed finish from Jesse Lingard’s curling cross. It was the Brazilian Under-20 international’s first senior goal for the club and you could see how much it meant to him from his celebration.
The Earthquakes had followed United in making a raft of half-time changes and one of those almost reaped dividends on 70 minutes when former Liverpool youth-teamer Marc Pelosi blasted an excellent drive just over the bar.
The last chance of the game fell to Chris Smalling, but the defender couldn’t keep his half-volley down from a corner after the Earthquakes keeper totally misjudged the flight of the cross. 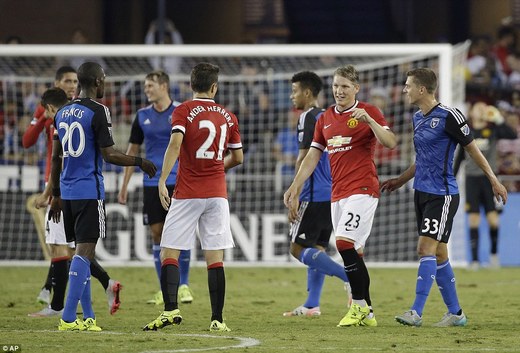