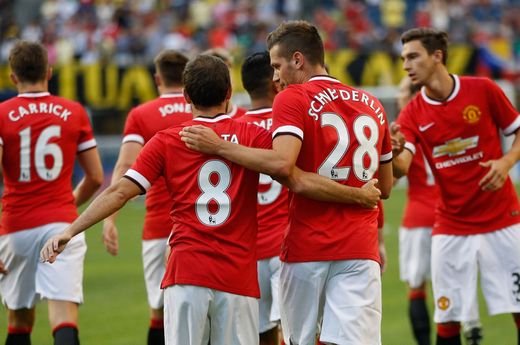 Morgan Schneiderlin got his Manchester United career – and Tour 2015 – off to the best possible start with the winning goal against Club America in Seattle.
The French midfielder, signed from Southampton on the day the Reds departed for Tour 2015, presented by Aon, headed home after just five minutes to seal a 1-0 victory in United’s opening game of the International Champions Cup at CenturyLink Field.
Schneiderlin was one of four debutants for the Reds on the night with Matteo Darmian, Bastian Schweinsteiger and Memphis Depay all enjoying their first run-outs in the red shirt. 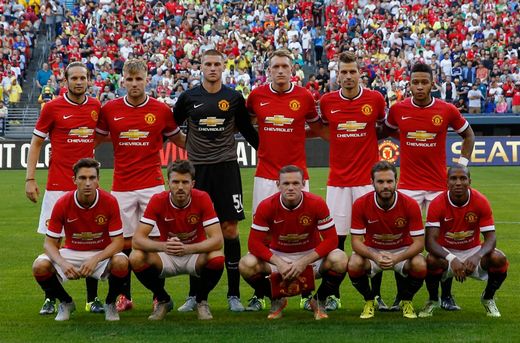 Louis van Gaal said before the match he would play two different teams and the United boss stayed true to his word. The first-half XI featured Sam Johnstone in goal – a minor injury to David De Gea ruled him out of the match – with Darmian, Phil Jones, Daley Blind and Luke Shaw across the backline. Michael Carrick, Schneiderlin, Juan Mata and Ashley Young were further ahead with Depay playing just behind Wayne Rooney. The Reds began the game brightly and were ahead after just five minutes. Some neat play from United led to the ball falling to Mata on the right wing and he crossed to the far post where Schneiderlin rose to loop home a header.
Club America looked to reply immediately and two minutes later Pablo Cesar Aguilar slid in to meet a cross at the far post, but could only put it wide.
At the other end Mata went close on 14 minutes after good play down the left between Shaw and Young, with the latter cutting the ball back for the Spaniard, but he saw his effort saved.
Rooney flashed an effort just wide after a nice set-up from Depay, while the Mexicans still posed a threat in attack and, shortly before the break, Johnstone made a brave dive at the feet of Miguel Samudio to smother the ball. 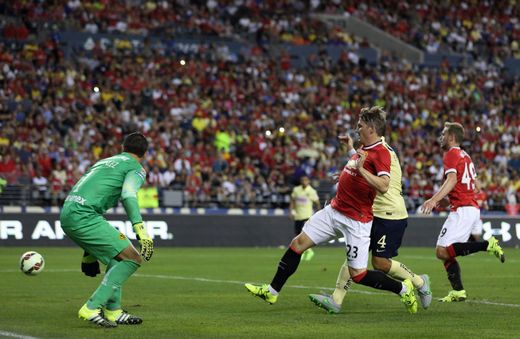 The Reds kicked off the second period with a completely new XI as Anders Lindegaard, Paddy McNair, Chris Smalling, Jonny Evans, Tyler Blackett, Jesse Lingard, Schweinsteiger, Ander Herrera, Andreas Pereira, Adnan Januzaj and James Wilson all came on.
Van Gaal’s men were on the attack from the off with Pereira collecting the ball in the area, selling Gil Buron a dummy and dragging an excellent low drive just wide of the far post.
Soon after Lingard burst forward down the other wing and found Januzaj on the edge of the area. The Belgian created a yard of space and went within inches of doubling the Reds’ advantage. 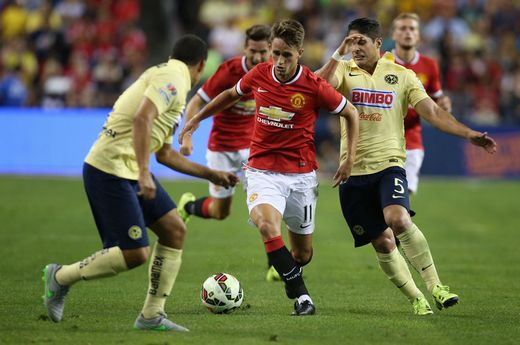 Herrera was next to flash an effort just wide, on 69 minutes, when he delicately angled a header towards goal after meeting a free-kick, but the ball rolled agonisingly past the far post.
Lindegaard had very little to do in the United goal up to that point, but he and the Reds breathed a sigh of relief when Alejandro Diaz’s close-range shot hit the post and went wide.
Januzaj looked particularly lively for the Reds and after battling to win the ball in the area he stung the palms of the Club America goalkeeper. That proved to be the last real opening for United and, despite a couple of minor scares at the opposite end, van Gaal’s men held firm and ensured a winning start to Tour 2015.

Morgan Schneiderlin got his #MUFC career – and Tour 2015 – off to the best possible start with the winning goal against Club America in Seattle.