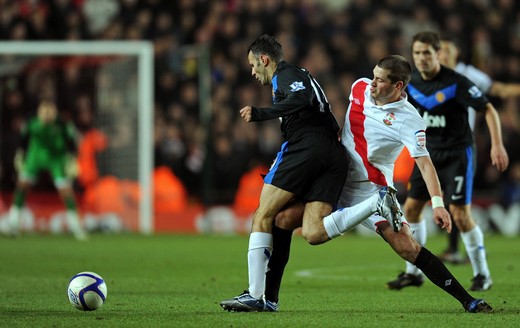 The Saints put up a brave fight, but it’s Manchester United who go marching into the FA Cup fifth round after yet another come-from-behind win.

For the second time in four days, the Reds trailed at half-time, only to haul themselves back into the game and snatch victory in the second period.

This time, at Southampton, it was Michael Owen and Javier Hernandez who did the damage, breaking Saints hearts after the home side had taken the lead on the stroke of half-time.

And, just as they did at Bloomfield Road on Tuesday night, Sir Alex’s substitutions made all the difference at St Mary’s. The Reds had been second best all over the pitch until the boss introduced Nani and Ryan Giggs just before the hour. Their presence, and a re-jigged formation, had an instant impact. Within seven minutes, United had levelled. After a further 11, the Reds had one foot in the fifth round draw courtesy of another ice-cool Javier Hernandez finish.

United's South Coast excursion may have yielded the same result as Tuesday’s trip to Blackpool, but the side was markedly different. Danish goalkeeper Anders Lindegaard was handed his United debut and played behind a Reds back four of John O’Shea, Chris Smalling, Jonny Evans and Fabio. Darron Gibson, Paul Scholes and Anderson were tasked with taking charge of midfield matters, while Gabriel Obertan and Hernandez spearheaded the attack, with Owen, somewhat surprisingly, playing in the hole.

Southampton boss Nigel Adkins also tweaked his side to give some of his younger squad members a taste of FA Cup action. Among those who benefitted was 23-year-old goalkeeper Barotsz Bialkowski, who came in for first-choice Kelvin Davis.

Both stoppers experienced scares in the opening exchanges. Lindegaard even had to pick the ball out of his net on seven minutes, although the goal was correctly ruled out after defender Dan Harding had strayed offside.

Down the other end, Owen curled a shot just wide of Bialkowski’s left-hand upright before going even closer on 16 minutes with an attempted cross that looped over the young Pole and struck the far post.

Southampton, 47 league places below the Reds, weren’t fazed by their opposition and continued to probe in attacking areas. Paul Lambert and Jose Fonte drew routine saves from Lindegaard, while Lambert also looked dangerous from set-pieces.

The Reds, meanwhile, struggled to win or retain possession in the centre of the park against Southampton’s four-man midfield. And so, when the home side went ahead on the stroke of half-time, few were surprised.

A minute earlier, Danny Butterfield had crossed for Guly Do Prado to head over from six yards. It should have acted as a warning, but instead, with the clock ticking towards the interval, Richard Chaplow was allowed to collect a Lambert flick in the inside right channel, drive into the area and smash a shot into the roof of the net.

The goal prompted changes from Sir Alex in the second half, although not all of them immediate. Wes Brown replaced Fabio from the first whistle (O’Shea moved across to left back), but the biggest change – the introduction of Nani and Ryan Giggs and a switch to 4-4-2 – didn’t occur until the 58th minute.

That provided United with much-needed width and an extra man in midfield, as Gabriel Obertan moved to the right and Owen pushed on to join Hernandez up front. Sir Alex’s men looked more comfortable almost immediately; seven minutes later, scores were level.

Both substitutes had been quick to stamp their influence on the game: Nani with direct running and Giggs with quick passing. But it was Gabriel Obertan who made the equaliser, jinking down the right before firing in a cross that popped up off Danny Seaborne for Michael Owen to head in from seven yards. Game on.

Harding almost restored Southampton’s lead when his low cross flashed inches wide of the far post before Nani volleyed crisply at Bialkowski. Then, Owen pounced on Ryan Dickson’s mistake 30 yards from goal and fed Ryan Giggs. He drew one defender before slipping a perfectly weighted pass through for Hernandez to control and squeeze a shot past Bialkowski.

United, likewise, squeezed into the next round and are now just three wins from a first FA Cup final since 2007.

Anders Lindegaard A solid debut from the Dane. There was only one nervy moment when he spilled a cross; otherwise, he dealt well with shots and high balls. No chance with the goal.

John O'Shea It's testament to John that Southampton wunderkind Alex Oxlade-Chamberlain barely sparked into life. He contained the youngster well and then showed his versatility by switching to left-back in the second half.

Chris Smalling Like most of the United side, his distribution wasn't great in the first half but defensively he looked sound and won most of the aerial duels he contested.

Jonny Evans The young defender didn't have an awful lot to do - it was a midfield battle for much of the game - but remained alert to the final whistle and hooked clear to spare Lindegaard's blushes in the second half.

Fabio The Brazilian will be disappointed he lost his man for Southampton's goal but was otherwise bright, particularly going forward. Afforded a lot of room in the final third.

Darron Gibson The Reds' formation just wasn't working in the first half and Gibbo was sacrificed in order to introduce Ryan Giggs.

Paul Scholes Sprayed passes around the pitch as we're accustomed, although one or two went astray. He improved as the game wore on and kept vital possession in the closing minutes.

Anderson United didn't win enough possession in midfield to allow the Brazilian to drive forward. His passing wasn't always accurate, either. A rare off day.

Michael Owen He played 60 minutes as a withdrawn striker, had plenty of touches of the ball and kept possession well. When pushed further forward, it took him mere minutes to head United level.

Javier Hernandez Starved of service in the first half but saw more of the ball in the second. He doesn't often fail to score when he plays and this was no different. One chance, one goal.

Gabriel Obertan Drifted in and out of the game for long periods but did brilliantly to tee up the Reds' equaliser for Michael Owen. Grew in confidence from there and will hope to play more often this season.

Wes Brown (on for Fabio, 46) Wes hasn't enjoyed much time on the pitch this term but seemed to relish his run-out at St Mary's. He was solid in the tackle and even looked to get forward on occasion.

Ryan Giggs (on for Gibson 58) Sent on to play in the centre of midfield, Giggs took hold of the game and set the tempo. Provided a perfect pass to set up Hernandez for the winner.

Nani  (on for Anderson 58) Nani's direct running put Southampton on the back foot almost as soon as he came on and provided a real threat in and around the box.