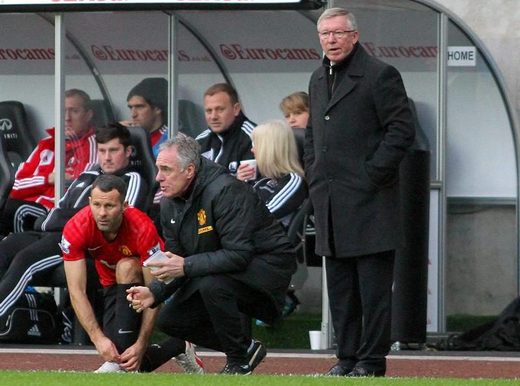 Sir Alex Ferguson has great respect for Liverpool's Steven Gerrard and Jamie Carragher, as he does for United's loyal local lads Paul Scholes and Ryan Giggs.

The manager accepts that times are changing with the number of overseas stars competing in the Barclays Premier League but thinks that will not detract from the commitment shown in Sunday's hotly-contested affair with the Merseysiders.

With the rivalry particularly fierce in bygone years when players on both sides were brought up watching their local club from the terraces, it is easy to understand why that attitude still persists with the homegrown heroes representing the two English footballing giants.

"There's no way either Steven Gerrard or Jamie Carragher are going to change it," said the boss. "They're going to be there until they finish their careers.

"In the modern-day game, it’s admirable as it’s very difficult to get that now. We’re very fortunate to have the same as Liverpool with Giggs and Scholes, these one-club players. I think it’s fantastic. And Gary Neville too but, unfortunately, he got injuries towards the end of his career. He could’ve still be playing if he hadn’t picked up injuries at the time he did."

The manager recognises that loyalty might be harder to find from imported players, even if United have fared well in this department over the years.

"The minute we started bringing European and South American players into the country, you’re never going to keep them for long periods," he conceded. "With four-year contracts, you’re lucky to keep them for that. We were lucky to have Cristiano Ronaldo for six years, Patrice Evra and Nemanja Vidic for seven years now and Peter Schmeichel stayed eight years. We’re very lucky that way but not every club can say that."

Even though there may not be too many Mancunians and Merseysiders in the starting line-ups this weekend, the passion will not be lacking from the two sets of players.

"You’ll see on Sunday it will be 100 per cent commitment from both teams," Sir Alex added. "But if you look back a number of years, there was a link with more English players and quite a few from this area, who would know exactly what it meant. They grew up supporting United as kids and were in the Stretford End, the likes of Nicky Butt, Scholes, Giggsy and Neville. All of them grew up with it.

"Liverpool, going back a bit further, had a lot of local players too – Ian Rush, Jimmy Case, Sammy Lee - all the local players they had at the time. It would mean a lot to them as they were living in it with that cocoon around them where their neighbours are supporters and things like that."

For the record, in Sir Alex's first battle with Liverpool, at Anfield in 1986, he selected four players who came through the ranks at Old Trafford.