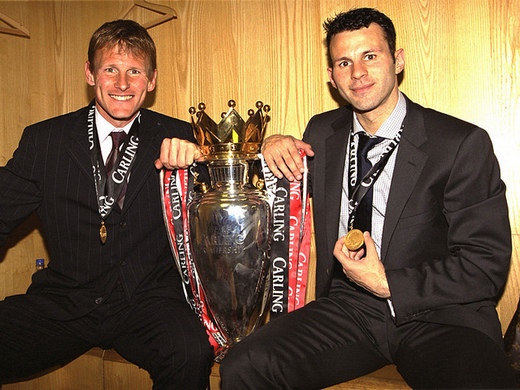 Teddy Sheringham has admitted he would not be surprised if Ryan Giggs takes his record for the oldest outfield player in Barclays Premier League history.

The ex-United striker was still turning out for West Ham in his 40s and played on for seven years after enjoying a key role in the Reds' Treble-winning success of 1999.

Giggs will be unable to usurp his former team-mate until the 2014/15 season and currently has only agreed a contract extension to take him to the end of the 2013/14 term. But his form and fitness both looked top-notch during United's 20th title-winning campaign.

"I hold the record for an outfield player," Sheringham told ManUtd.com, "but Giggsy has still got a couple of years left in him.

"I think he would have to play another season on top of next year [to beat my record]. You have to be that build – I didn't carry a lot of fat when I was playing and he definitely doesn't. He's kept himself in good shape."

The improvement in sports science has been credited for helping today's stars perform at the highest level for longer but Sheringham pinned his faith in his own knowledge of his body – something that clearly stood him in good stead.

"Sports science had come in for about five or six years when I was still playing," he stated. "But I didn't pay too much attention when I was involved. I got through 20 years of my career so there was no way I was going to start listening to sports science and people telling me certain things I could and couldn't do.

"It just didn't go down well with me as I had my routine and regime and that was it. You get to know your own body as you get older. It was only when you're younger that you get very frustrated but you learn to realise what's going on when you're older."

Sheringham believes the elder statesmen in the squad, including recently-retired Paul Scholes who has been tipped to stay on as a coach, can continue to inspire the younger players.

"Without a doubt, they are the ones that lead by example and show the youngsters how it is done," he added. "People are still looking up to the likes of Giggsy, Scholesy and Rio [Ferdinand] from the next generation."