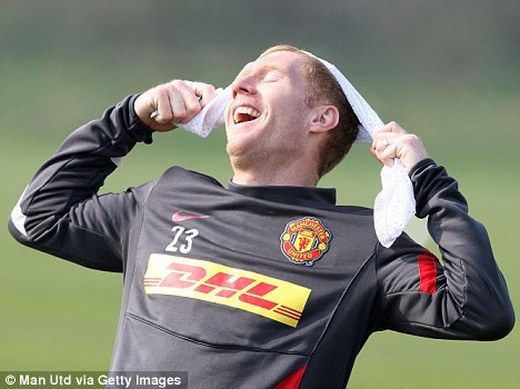 The veteran playmaker retired at the end of last season, but made an unlikely return in the 3-2 FA Cup win over rivals Manchester City on January 8.

Scholes, 37, has been in fine fettle since getting back to business, starting eight times in 13 appearances, and netting two goals.

Now he is tempted to sign a one-year contract extension, like his colleague Ryan Giggs did in February.

Sir Alex Ferguson said of Scholes: 'His form has been fantastic.'
Ferguson for one would be delighted if the midfielder prolonged his return, with Manchester United's midfield already in need of reinforcement.

Both Scholes and Giggs scored in United's 2-1 win over Norwich at Carrow Road, securing a vital victory.

Scholes made his debut for Manchester United in September 1994, against Port Vale, a 2-1 victory in which he scored both goals for his side.

It is astonishing that over 17 years later he is still an influential part of the United team.

And it could be that Scholes' input is what it takes to secure the title for the Red Devils.