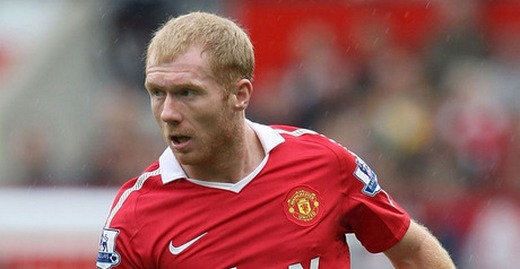 Paul Scholes has decided it is time for him to hang up his boots and retire from playing football.

Paul was part of the new wave of talent that came through to United's first team during the mid-90's. He scored twice on his debut in the League Cup at Port Vale in the 1994/95 season and since then has enjoyed a long a successful career, making an incredible 676 appearances for the Reds.

Paul will take on a coaching role with United from the start of next season. Fans will also have the opportunity to see Paul play again at Old Trafford in his testimonial match in August.

Sir Alex Ferguson said: "What more can I say about Paul Scholes that I haven't said before. We are going to miss a truly unbelievable player. Paul has always been fully committed to this club and I am delighted he will be joining the coaching staff from next season. Paul has always been inspirational to players of all ages and we know that will continue in his new role."

Paul Scholes said: "I am not a man of many words but I can honestly say that playing football is all I have ever wanted to do and to have had such a long and successful career at Manchester United has been a real honour. This was not a decision that I have taken lightly but I feel now is the right time for me to stop playing. To have been part of the team that helped the club reach that 19th title is a great privilege.

"I would like to thank the fans for their tremendous support throughout my career, I would also like to thank all the coaches and players that I have worked with over the years, but most of all I would like to thank Sir Alex for being such a great manager, from the day I joined the club his door has always been open and I know this team will go on to win many more trophies under his leadership."

David Gill said: "It is very sad day for Manchester United fans around the world. We all know that Paul was one of the players that came through the ranks of the academy system in the 1990's and has established himself as one of the greatest players to ever wear the United shirt. It is very important that the club keeps its association with these great players and we are delighted that Paul will join the coaching staff."