Scholes backs Giggs to play on 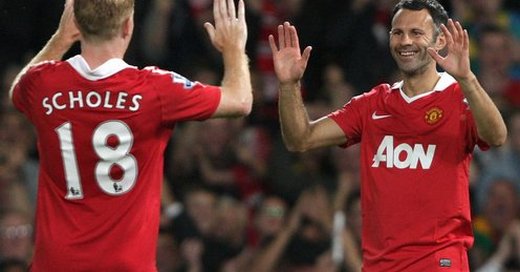 Paul Scholes believes Ryan Giggs can continue playing at the top level for Manchester United for three more years because of his meticulous fitness regime.

Giggs turned 40 on Friday but was not included in the United squad to face Tottenham Hotspur at White Hart Lane on Sunday.

The Welsh midfielder's performance in the team's 5-0 UEFA Champions League win against Bayer Leverkusen four days previously, however, illustrated his continued importance to the team.

And Scholes, who retired at the end of last season, feels that the way player-coach Giggs prepares himself for the modern game will ensure he can play for several more years.

"He is an incredible player, really," Scholes said. "To still be doing what he's doing at is age is no surprise when you know the man, how well he has looked after himself over the years.

"To play football these days you have to look after yourself incredibly well.

"It is such a professional game these days, the players are so fit, but he is a natural athlete.

"He will do all his yoga, he will eat the right foods, he prepares himself meticulously for what is needed as a Premier League footballer.

"Everything he does is geared towards his fitness and keeping healthy."

Good levels of fitness alone, though, would not be enough to keep Giggs in the United side, but Scholes is confident the veteran can continue to contribute to the cause in the ensuing years.

"He always says he will play as long as he is contributing, and there is no evidence of his contribution waning at the moment," Scholes said.

"The way he plays, he sits in midfield, he controls a game, he can make a pass, he can defend, he can still run up and down all day if he wants to. I really think he is capable of doing that."