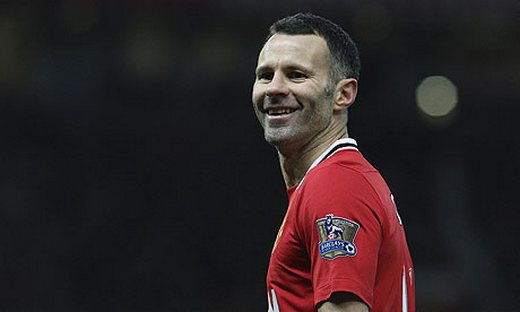 Ryan Giggs has said that practising yoga has kept him in the game for so long and added that he would still love to play another 100 games for Manchester United. The Welshman, who is chasing his 13th Premier League title, told Gazzetta dello Sport that he has had to change the way he thinks on the pitch but that he is still "living the dream".

"The yoga has definitely helped me," the 38-year-old said. "It helps me train every day because it gives me the flexibility and the strength not only to play the game but to train as well.

"I rarely miss a training session even [if I do] a little less than the younger players I still go out and train. [When you get to my age] you have to change the way of thinking. I was a quick player when I was younger, now I am not so quick. [You have to] use your experience, use your intelligence on the pitch, to adapt your game and change your game, as I have done."

The Welshman also confirmed that he wants to stay involved in football after ending his playing career but admitted that taking charge of United may prove a step too far. Initially, at least. "At the moment I am just focused on playing. But whatever happens afterwards, I will be involved in football somewhere," he said.

"I've done my coaching badges so I've done all I can really to prepare myself for life after football [as a player]. To manage a team like United ... Yes, [Pep] Guardiola has managed [to be in charge of a big club straight away] with Barcelona but even he was coach of the reserve team, the B team, for a couple of years so he had a little bit of experience so... [but] we'll have to see."

Giggs, who has already made 28 appearances and scored four goals this season, added: "When I was younger my goal was to play for Manchester United. Just once. The after that you get greedy, you want to be in the team all the team, then you want to score goals.

"Then you get really greedy and you want to win trophies and you want more trophies and all of these things have happened. You realise your dream and at 38 I am still living my dream. You can't ask for more than that. Records and goals are not a big part of my motivation for going forward. Of course, playing 900 games for United is special but I don't look too far into the future, I just try to enjoy the moment and to do my best. If that is another 10 games then so be it, and if it is another 100 games then that would be great."

United's local rivals, Manchester City, have emerged as the main rivals for the Premier League title this season and Giggs said: "We have the experience but City have the hunger, if we both keeping going like this, everything will be decided in the derby." And asked which players he had been most impressed with when playing against Italian teams during his long career, he singled out Javier Zanetti of Internazionale and Juventus's Alessandro Del Piero, calling the former "a complete player".