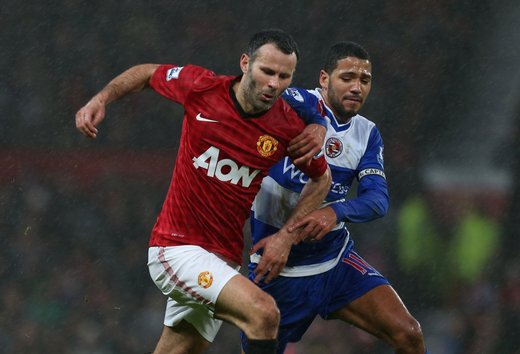 Former Man Utd striker Sheringham was 40 years and 261 days old when he made his final top-flight appearance – with West Ham in 2006.

But Old Trafford legend Irwin is convinced evergreen Giggs, who recently penned a new one-year contract to keep him at United until the end of the 2013-14 season, will eclipse that feat.

The Welshman, on course to land the fourth Double of his glittering career, hits 40 on November 29 and at the end of next season he will still be 80 days shy of Sheringham’s milestone.

But Irwin, who played until he was 38 and sits fourth on United’s golden oldies list, reckons Giggs will race past Sheringham – by staying on for another year after that.

The ex-Republic of Ireland right-back, 47, said: “I have no doubt he’s going to beat Sheringham. Who’s to say Ryan won’t get another deal at United?

“He’s amazing the way he just keeps going on and on and on.

“He leads by example with how he trains, how he never shirks anything and the amount of effort he always puts in every day, every week, every game. It’s absolutely remarkable.”

Irwin reckons Giggs’ continuing ability to thrive at the highest level is down to him adapting his style over recent seasons, allowing him to fulfil a number of roles right across the midfield.

Which is something Sheringham, whose trademark was guile and link-up play in the danger area, was never able to do.

“That’s why he can play on the wing, in the hole or in central midfield.

“To see a 38-year-old running around and bossing the match like he did was just incredible. ”

Giggs can expect to be involved again tomorrow in United’s FA Cup sixth-round replay at holders Chelsea – which comes less than 48 hours after the runaway league leaders’ trip to Sunderland.

Despite the hectic fixture list, the Old Trafford veteran is adamant that both he and his team-mates are up for the two-pronged trophy assault.

Giggs said: “It’s no problem with all these games at the moment. We are out of the Champions League - so we want to be in the Cup and going for the League.

“The confidence is good and we’ve got the squad to handle it.”