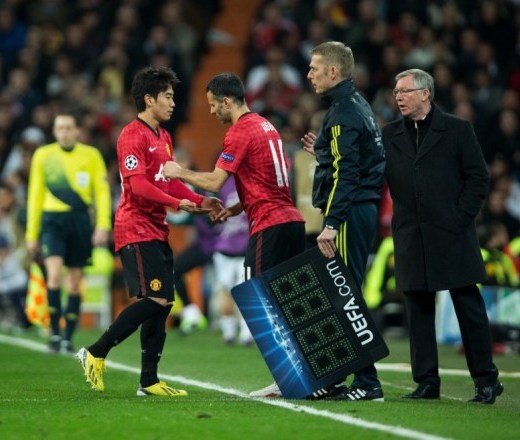 The notoriously hard-to-please Real Madrid fans have rarely applauded their own players this season, let alone opposition ones. So Ryan Giggs wasn’t the only person who was stunned when sections of the Bernabeu crowd gave him a standing ovation as he entered the fray in last night’s 1-1 Champions League draw.

The Manchester United veteran was introduced as a 64th-minute substitute for Shinji Kagawa in the first leg of the last-16 tie to notch his 150th European appearance for the club – prompting warm applause from both sets of supporters.

The 39-year-old two-time Champions League winner said: ‘It took me by surprise.

‘It was obviously very good – I’ll have to play here more often!’

And Giggs singled out striker Welbeck for praise. The Welshman added: ‘He was brilliant all night, Danny. He was causing them all sorts of problems. He deserved the goal.

‘It’s obviously a good result. We scored the goal – which is always important, getting that away  goal – and we defended really well, so we’re relatively happy.’