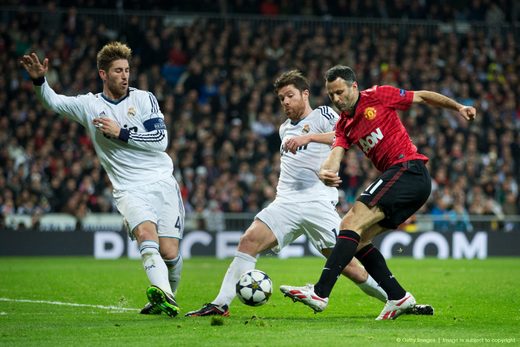 Ryan Giggs has hinted at how Manchester United may approach the return leg with Real Madrid in three weeks' time by stating the emphasis is on them to "pressure" José Mourinho's side.

The last-16 Champions League tie is balanced at 1-1 following Wednesday evening's first leg at the Santiago Bernabéu when Danny Welbeck's opener was cancelled out by Cristiano Ronaldo's equaliser later in the first half.

On the away goals rule this means a scoreless draw at Old Trafford would be enough for United to knock the nine-times European champions out of the competition.

But Giggs, asked if the tie was still 50-50, said: "Yeah, I think it is. You have got to recognise the quality Real Madrid have got. They won't be fazed by coming to Old Trafford and it is up to us to put pressure on them. The fans will be behind us and we'll need to put in a top performance like tonight [Wednesday]."

Despite Real having 28 shots at David de Gea's goal they managed to score just the once. "We have defended really well over the last few weeks," Giggs said. "We had clean sheets against Fulham and Everton and we defended really well both as a team and individually against Madrid. David has had to make some great saves and it was good for him to come back to Madrid and put in a big performance."

Michael Carrick and Phil Jones agreed with Giggs that the second leg on 5 March will be tight. "We can be relatively satisfied with the result," Carrick said. "With the chances we had we feel we left a goal out there but they have had opportunities as well. It was quite an entertaining game in that respect.

"We still feel that with another goal we would be over the moon. A score draw is still a good result. We are not getting too down about things. You have to respect them. They have so much talent and they are going to cause you problems.

"The disappointment was the goal. It was so simple. A cross and a free header. But we have seen Cristiano do that many times. Unfortunately he has done it again. They had other opportunities and some of the chances we had, it was one of those games."

Carrick does not believe the sides' respective fixtures before the return game will affect the tie's outcome. "The second leg is a one-off game. Who is playing who beforehand doesn't count for much really. They have their schedule and we have ours. Both teams will be ready before the game so I don't think much comes into it."

Jones is insistent that United, despite their away goal, are not in the stronger position. "No not really," he said. "It's another game, it's a draw, it's a 0-0 at the end of the day and we have to go out and repeat the same performance."

Asked where the side might improve when next facing Madrid, Jones added: "Just to stay solid as a unit. On a few occasions we let that slip and we know they can punish you. It only takes a second to score. The lads are disappointed. We should have scored more than we did, and on another day we'd have done that. With a bit more luck it might have gone in.

"They're a great team in Europe. It's about how many chances we give them. You know they're going to create chances in the game, they'll do that to any side. But overall I think we defended well all over the pitch."