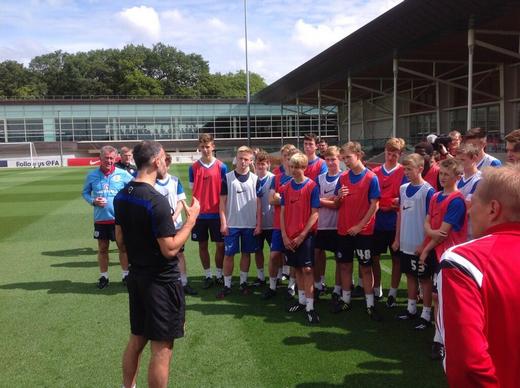 Ryan Giggs passed words of wisdom on to a group of youngsters at England’s training base St George’s Park as the Manchester United legend takes the final steps to becoming a fully qualified coach.

Giggs is looking to make the transition from player to coach as he completes the Pro Licence badges after a brief spell at the Old Trafford helm last season following David Moyes’ departure.

The former Wales international has now called time on his illustrious playing career and with a wealth of experience at the top level, he has an abundance of knowledge to pass on.

Under Moyes the Welshman worked as a player/coach before being installed as interim manager following the dismissal of the Scot. He took charge of United’s last four games of the season and was a popular candidate to take the reins full-time.

However, having announced his retirement as a player at the end of last season, Giggs will become Louis Van Gaal’s assistant at Old Trafford when the Dutch coach takes control after the World Cup in Brazil.

Van Gaal was mentor to Jose Mourinho during his time at Barcelona, and Giggs recognises the importance the 62-year-old will have on his coaching career.

He said, ‘Louis Van Gaal is a world-class coach and I know I will learn a lot about coaching from being able to observe and contribute at such close quarters.’