Ryan Giggs says the future is bright at Old Trafford 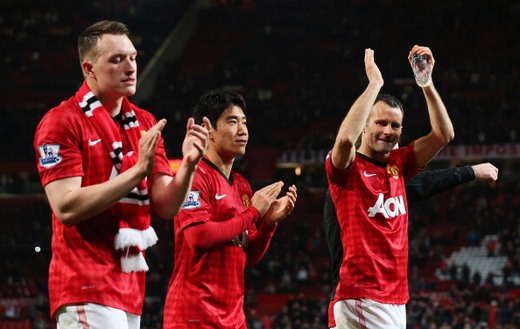 It was United's 20th league title and Giggs, who this season continued a phenomenal record of scoring in every Premier League campaign, paid tribute to the squad.

Asked how special this title compared to the previous 12 medals, he told Sky Sports: "It's obviously special. When you lose it in the manner that we did last year, to win it back is something special especially by putting on a show in the first-half, Robin's goal - we did it in style.

"From Christmas onwards, we looked really good and once you got that platform of defence and when you have the flare players that we've got then you've always got a chance."

Seven players in the squad won their first championship and the Welsh winger believes there is a lot to come from them in the future.

"That's the key to the manager's success," said Giggs. "The way he evolves and the way he is always looking forward and shows with the amount of young players we have in the team.

"These are exciting players and players who are going to be here for a very long time. They'll hopefully carry on that tradition of competing for trophies."

The 39-year-old refused to be drawn on how long he would continue playing for, adding: "I'm just enjoying it and as long as I'm enjoying it and contributing to the team then I'm going to carry on.

Giggs was also quick to pay a glowing tribute to Sir Alex Ferguson, hailing his long-time boss saying: "His appetite is second to none. Every day at the training ground he's the first there, his enthusiasm is brilliant and that feeds through the club, he is the club.

"He works hard and I've been very lucky to play under him for so long."