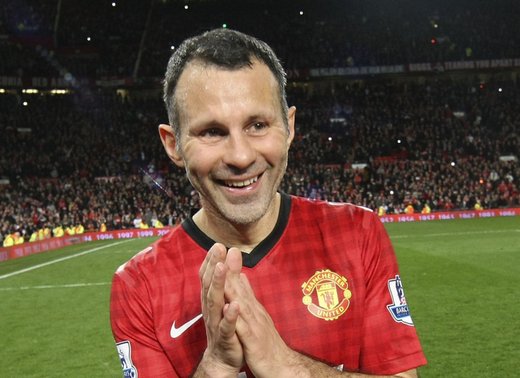 RYAN GIGGS won a 13th title on Monday night — the same number as Arsenal have won in their entire history.

And the bad news for the Gunners — or anyone else who fancies winning one — is that the veteran Welshman has not finished yet.

Giggs, 39, has committed himself to another year at Manchester United and is already eyeing more silverware.

And he explained the secret behind his glittering career at Old Trafford is to quickly put one triumph behind him and start looking to the next one.

He said: “As a player, you strive to win that trophy. Once you’ve got it, you enjoy it, then the feeling goes quite quickly.

“You wait for the end of the season, wait for your holidays as you need the rest but then look forward to the next one.”

He added: “I think the first few you don’t remember too much and just think more and more are going to come.

“Now, you take it in and enjoy it that much more because you know there aren’t many left.”

When it was pointed out to him that he has lifted as many top-flight championships as today’s opponents, Giggs smiled and said: “Yeah, it’s fantastic.

“I’ve worked hard to still be playing at the club at 39.

“I’ve had luck along the way. I’ve only had the one manager and I have played with good players. A lot of things have gone for me — and a lot of hard work as well.”

Some of the United squad — such as Shinji Kagawa and Phil Jones — will pick up a first title medal next month and Giggs has told them to make sure it is the first of many.

He said: “It is special when you win it for the first time. I went through a similar scenario with mine.

“We lost out to Leeds and then the next year we came back and won it.
“Hopefully it can have the same effect on them as it did on me — and give them the confidence to go and do it again.

“You just have to maintain your hunger. The manager here has done that and players who have done it a few times, they’ve done it, too.

“That’s what the players have to do and I’m sure they will.”

And he reckons boss Alex Ferguson (left) will already be making his plans for next season — and will have been for a while.

He said: “I think the manager thinks about it throughout the season.

“He’ll have an idea where he wants to strengthen, he’ll always be looking forward and doesn’t want to stand still.

“There’s a real buzz around the place and rightly so — it has been a great season.”