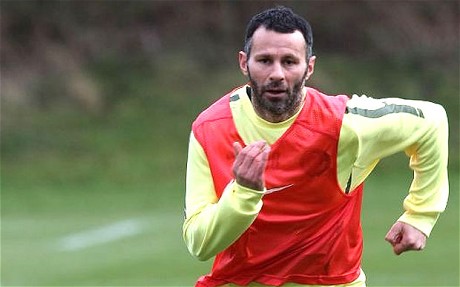 The United midfielder is set to make a record 34th derby appearance this lunchtime in a game which has been described by Sir Alex Ferguson as “potentially decisive” for the title hopes of both teams.

He said the derby “has got more intense over the last few years. The money that has come into City means they are up there challenging and the hype around the games in the last couple of years has been massive.

“Tackles will go flying in. You can’t get away with tackles like you used to, but all players know the importance of the game.

“You don’t tend to leave the house for about a week if you lose. If you’ve lost one, you’ll be walking down the street and a City fan will come and let you know about it. But that’s me being a local lad and living around the area.”

Giggs admits that City, with former United forward Carlos Tévez and Spanish winger David Silva providing their inspiration, now demand respect, but he insists that United have overcome the loss of Tévez to their Manchester rivals.

Injuries to defenders Rio Ferdinand and Jonny Evans have opened the door for Chris Smalling to make only his fourth Premier League start for United on Saturday.

Despite the absence of England captain Ferdinand, Ferguson believes that Smalling, a £12 million buy from Fulham last January, has proved his first-team capabilities.

“He may lack a bit of big-game experience but, in terms of the experience he has got, he’s used it well.

“We identified Chris when he was at Fulham and it was a great decision. Our scouting department did a great job. We got him at a good age and it will prove very fruitful.”

Ferdinand’s calf injury is expected to clear in time to face Marseille in the Champions League in 10 days’ time, with Ferguson insisting that the problem is not due to a recurrence of previous back problems.

He said: “It could have happened to anyone. It’s nothing to do with his back. That was our main concern.

“It’ll just be a couple of weeks out, but you have to remember he’s been in first-team football since he was 17 years old. That’s a long time so he’ll pick up little strains like a lot of players do. I’m sure this isn’t a long-term thing.”

Ferguson, who is close to agreeing a new three-year contract for midfielder Michael Carrick, has backed Michael Owen — scorer of the injury-time winner in last season’s 4-3 win against City at Old Trafford — to prove United’s secret weapon in the title run-in.

“I keep trying to get myself into a situation where I can play Michael Owen more,” Ferguson said. “I’d like to be more fair that way because he’s a ------ good player.

“He’s a terrific trainer and a phenomenal player anywhere around the box.

“The advantage we have with Michael for the run-in is that he has terrific experience of big games. That could prove very important to us.”