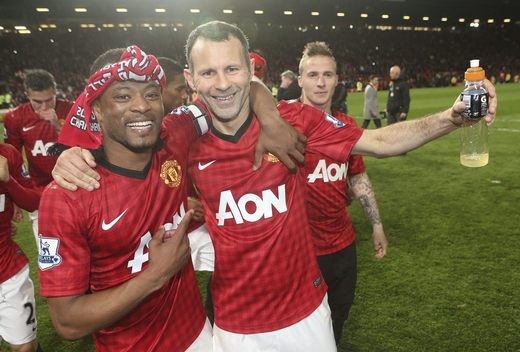 Manchester United veteran Ryan Giggs insists this season has been one of his finest with the club.

The 39-year-old Welshman celebrated clinching his 13th Premier League title following the 3-0 victory over Aston Villa on Monday and admits he has enjoyed the manner of the success after seeing Manchester City snatch the crown last term.

"If you look at the amount of wins we have had, you have to recognise it has been a brilliant season in the league. Some of the performances have been superb," said Giggs.

"Whenever you win the Premier League it is something special. Obviously, if you look at the end of last season that was a huge disappointment.

"To come back the following year and perform so strongly means it must rank really high. Overall, we have to be happy with the way it has worked out."

United still have four games left - starting with Sunday's trip to Arsenal - and Giggs has Chelsea's Premier League record of 95 points in his sights with four wins required for a total of 96.

"The aim is to get as many points as we can, then hopefully we can get the record," he said.

"It won't be easy because we have some tough games coming up. We always want to win games. The manager makes sure of that.

"If we don't perform he won't be happy, whether we have won the league or not.

"We want to go off in the summer knowing we have had a good end to the season."

After United have completed their final four fixtures, Giggs will jet off on an annual summer holiday, return fully rested, and get ready to do it all again.

"You just enjoy the moment," he said. "Then you go on holiday, come back and do it all again. That is the way it is at United.

"You want to enjoy what you have done this season because it is a great achievement but you have to retain the hunger to do it again."