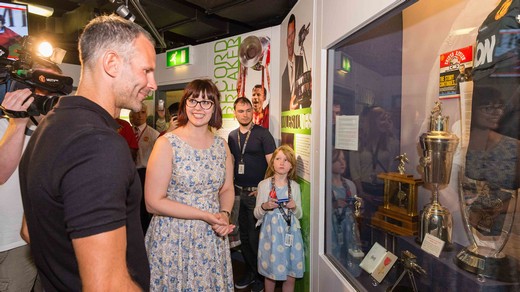 After making his debut in 1991, Giggs made 963 appearances for United, scoring 168 goals and winning a record haul of medals and accolades. The dedicated retrospective allows fans to view some of his most treasured possessions from his career, which are on display for the very first time.

Ryan Giggs: The Man For All Seasons comprises over 40 exclusive items, including Giggs’ Treble medals, his FIFA Club World Cup medal and the ball from his very first Manchester United goal.

The exhibition also features objects relating to Giggs’ personal achievements such as his PFA Player of the Year Award and BBC Sports Personality of the Year award from 2009, and his OBE, awarded for his services to football in 2007.

Man Utd's most decorated player joins an elite band of Red greats with his own exhibition.Source: Manchester Evening News

Items that are to be displayed for the first time include:

The interactive exhibition allows visitors to zoom in and examine up close some of Ryan’s medals. There are also several specially-recorded interviews with the man himself, in which he details his personal career highlights. Diehard fans of the Welsh winger can also test their knowledge with a quiz about his career.

Manchester United group managing director Richard Arnold comments: “There are very few players who can boast a CV like Ryan’s. He is one of the most decorated British sportsmen of our time with a career spanning across more than two decades. His achievements are a big part of the club’s history and the Museum’s dedicated exhibition gives fans a chance to relive some of those celebrated moments.

“Many of the pieces on display are from Ryan’s personal collection and we are delighted to be able to share these with fans for the very first time. The Manchester United Museum and Tour is an award winning attraction, welcoming hundreds of thousands of visitors each season and I am sure the addition of Ryan Giggs: The Man For All Seasons will make it all the more popular with our fans.”

Ryan Giggs says: "It is a great honour to have an exhibition dedicated to my time at Manchester United. I have spent my whole career at the same club and I am proud to have played a part in United’s achievements over the past few decades.

“My family and I have enjoyed visiting the Manchester United Museum several times and to see the story of my career on display alongside so many United greats makes me very proud.

“Many of the items on display have never been seen by the public and the ones I've chosen to loan to the Museum are the ones that mean the most to me. I am delighted to be able to share these special mementos with the fans.”

Ryan Giggs: The Man For All Seasons is open to visitors to the Manchester United Museum and Tour until June 2016. For more information or to purchase tickets, visit manutd.com/museum or call 0161 826 1326.