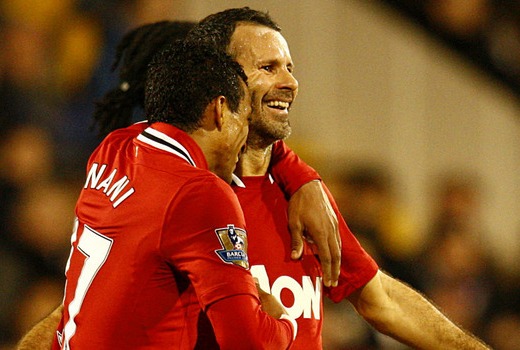 Ryan Giggs is planning to discuss his Manchester United future with Sir Alex Ferguson and is keeping an open mind about playing on for another season.

The 38-year-old is United's record appearance holder and, by netting in the 5-0 win over Fulham on Wednesday, maintained his record of scoring in every Premier League season.

He has been increasingly used in a central midfield role by Ferguson in recent years and his current contract runs until the end of the campaign.

The former Wales international is still enjoying playing at the highest level and will shortly sit down with his manager to talk about the future.

"It's almost that time when I'll sit down with the manager and see what his plans are [for the future] and I'll see how I'm feeling," Giggs told the club's official website.

"At the moment I feel really good and I'm enjoying things more than ever, so we'll just have to wait and see."

Having established his reputation as a flying winger during his younger days, Giggs admits he now prefers a central position alongside team-mate Michael Carrick.
He added: "I love playing there. I've made no secret of that and it's probably my preferred position now.

"I said the other night it's a joy for me and Michael to play in midfield when you've got the movement in front of you like we had at Fulham.

"It makes our job so much easier when you've got three or four players making great runs when you're on the ball."