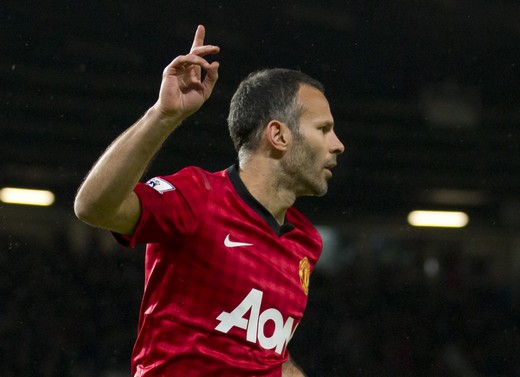 RYAN GIGGS can be the next top boss to come from Manchester United.

That is the verdict of Reading manager Brian McDermott, who takes his side to Old Trafford tonight for their FA Cup fifth round clash.

After meeting the evergreen Welshman at a coaching course recently, McDermott believes the 39-year-old will be the next United player to conquer the dugout.

He said: “I met him recently at Burton. He was doing his pro licence and he has got all the ingredients to be a top manager.

“I was really impressed, he came up to me and shook my hand. He is humble and quiet.

“I asked him how many medals he had won.

“He was very modest and and just said 12. I asked what he did with them all and he said they were in museums. He was a really polite man.”

Although he is 51, McDermott is a spring chicken in relation to United boss Alex Ferguson.

Having been in the Madejski Stadium hot-seat for three years, the former chief scout has a good record in the Cup — reaching the fifth round three times in four seasons.

But he is unlikely to ever achieve the success had by 71-year-old Ferguson. McDermott joked: “I’m just pleased to wake up in the morning to be honest.

“I don’t think about what will happen in 20 years.

“I’ll never get to those amount of games, he started a lot younger than me.

“But he is enthusiastic and it summed it up for me when he came to our game against Stoke. He wanted to see the opposition and that tells you everything you need to know about the man.

“I’ve read a lot about Bill Shankly and what he did — Jock Stein too.

“Sir Alex Ferguson has to be right up there. He’s the figurehead of that club.

“From when he took over to where they are now is incredible. He’s a top guy, too, and I have a lot of time for him, he’s good company.

“It’s funny, but I think this game means more to me than the players.

“I’m older and I’m off to manage a side at Manchester United. When you’re younger, you think these things will happen year in and out — but sometimes that isn’t the case.

“The players’ attitude is great but I appreciate the opportunity to walk out at Old Trafford. I will aways appreciate that and look back at it.

“I appreciate every single day but when you’re younger you don’t. You think it will last forever, so it’s a different mindset.”

Despite never winning at Old Trafford, Reading have earned a FA Cup replay when Adam Federici starred in goal during their 1-1 fifth-round draw in 2007.

Royals then had their own ‘United moment’ when they came back from a play-off defeat to win the Championship last season.

And McDermott has predicted that the Red Devils will go on to win the Premier League after racking up a double point advantage over Manchester City — and get revenge for losing the title last season.

He added: “They’re 12 in front with 12 to go and he won’t take anything for granted, there’s no doubt about that.

“To move on the way they did from last season, to take that hurt on to the pitch — that just tells you the power of the people there.

“That hurt that day would have given them a tough summer.

“We can relate to that in a small way because we had the play-off final defeat.

“You have two ways of going — you either go under as a club or get stronger. United have got stronger and we got stronger from our play-off final.”