Ryan Giggs biding his time before taking his rightful position 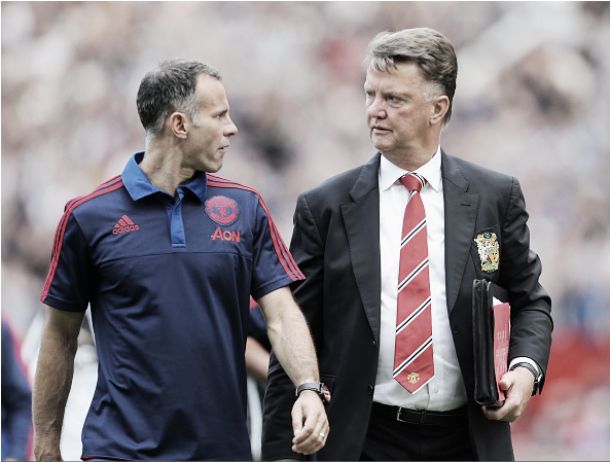 The Welsh legend is currently assistant manager to Louis van Gaal, but having tasted life at the helm, he should be primed to take over

History tells us that it wasn't so unremarkable, but in fact it was a significant date in United's history. It was the footballing birth ofJames Wilson, and that could prove to be a landmark day. However, more importantly, it was the last time Ryan Giggs wore a United shirt as a player - the last of an incredible 963 appearances.

Anybody that remembers the game, and Giggs appearance, should also remember that whilst it was only a cameo Giggs was the best player on the pitch while he was there. It was only just over 20 minutes, but he went into centre-midfield and just took over. He wanted the ball, laid it off, ran at players and although the occasion may have had a testimonial feel about it, he was outstanding. Eldin Jakupovic, the Hull keeper that day, denied Giggs the perfect send off when he brilliantly saved a free kick reminiscent of the one he scored against Blackburn Rovers in the 1993 title party.

There are a few things about that day that mark Giggs out as the perfect man to manage Manchester United. It was his 963rd appearance. Sir Bobby Charlton is Mr Manchester United, but Giggs surpassed the legend's remarkable 758 appearances, and equally knows United like the back of his hand. He actually was the manager on that day. Not only did he grace Old Trafford for the last time as a player, but he did so by picking himself! He played centre midfield. Whenever you think of Giggs as a player, you associate him with a 'willow-the-wisp' flying winger. He reinvented himself, and that takes a serious understanding of the game.

Giggs is the perfect demonstration of how to prolong football career

The way Giggs looked after his body, with diet and yoga, was what enabled him to play until the age of 40 for Manchester United. That is another thing that will stand Giggs in good stead, knowing what it takes to succeed and being able to pass that knowledge to future players. Put all of those things together, and add the fact that Giggs is a winner, the most successful British player in history, and it will be a huge surprise if Giggs does not become a successful manager to compliment his playing achievements.

Giggs was no Roy Keane, not even when he played centrally in midfield. A small understatement, of course. Don't be fooled that he doesn't have a steely side though. Hull City was his third game in charge after David Moyes' departure in the 2013-14 season. He would remain for only one more game before Louis van Gaal came to the club. In that time he showed he is is own man. His first game as manager against Norwich City, he took the shackles off the players and allowed them to express themselves in a 4-0 victory.

However, apart from just allowing freedom for players to express themselves, he made a hugely significant selection change in defence.Nemanja Vidic was on his way out of the club, and Rio Ferdinandhad allegedly been critical of Moyes. Neither featured all that often. In the Norwich game, one of United's most successful defensive partnerships was re-instated. Giggs identified that on that day United needed a result. They needed a lift. Chris Smalling, Phil Jones et al needed games and to develop, but that day he just played his best two central defenders, though Jones played at full back. Simple.

Giggs has shown his managerial qualities

The next example was the Hull game itself. After the euphoria of the Norwich game, United put in an abysmal performance at home to Sunderland. Giggs came out and stated he was shocked and let down by the performance, and he acted. Of the six midfielders and forwards that lined up against the Mackems, only Michael Carricksurvived as Giggs gave debuts to both Wilson and a 20-year old Tom Lawrence. Nani, Darren Fletcher and Javier Hernandez never made the squad and Juan Mata and Ashley Young dropped to the bench. Ruthless.

Now, he is playing second fiddle to a manager he would have done well to have seen the likes of before. Louis van Gaal appears to be a one off. He is so obsessed with his 'philosophy', that it seems to create a barrier with certain players - including established, elite players.Angel Di Maria, Radamel Falcao and Robin van Persie have all departed after one season under van Gaal at Old Trafford after they all failed to meet van Gaal's requirements.

Di Maria has since criticised van Gaal, and said he was too difficult to work with. He joins players like Luca Toni and Hristo Stoichkov in venting their anger at van Gaal's methods. Yet for every dissenting voice, there is a Xavi or an Andreas Iniesta. They have been very vocal in their support for van Gaal and his methods. There could well be a clue in who supports and who doesn't. Most of his detractors are established stars, yet his fans tend to be players he has groomed.

As van Gaal never reached the top as a player, maybe he has more difficulty in converting established players to his style, than he does with younger, raw talents. Maybe that's why Anthony Martial came in as opposed to Edinson Cavani, or someone of that ilk. Giggs wouldn't have any problems on that score. He is widely acclaimed around the footballing world. His playing career speaks for itself, and his fledgling management career showed enough to suggest he knows what it takes to handle stars regardless of age and stature.

At this moment, he is supporting van Gaal. In the dugout there is rarely a word exchanged. The comical look between the two when Hernandez missed his penalty against Club Brugge said more than words could, but whereas van Gaal scribbles furiously on his clipboard, Giggs just observes. Those beady eyes dart around, and it is pretty clear that no notes are required. He understands everything. Van Gaal has this and next season on his contract, but he will be under pressure to deliver this year. The Welsh Wizard, the heir apparent, is ready and waiting.