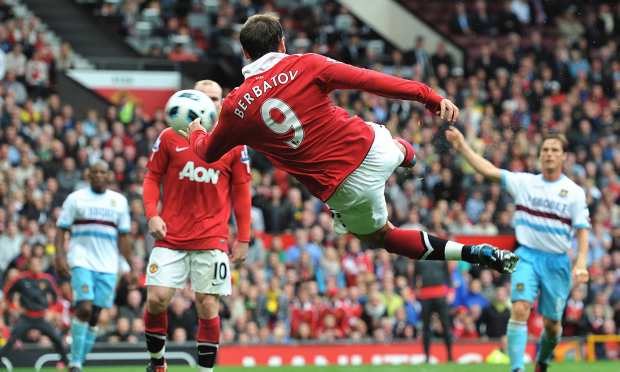 Roberto Mancini has been warned that Dimitar Berbatov is the man to inflict a potentially fatal blow to Manchester City’s title hopes.

The Bulgarian hitman has been largely responsible for firing United to the top of the table with 19 goals this season.

And Ryan Giggs is convinced the £30.75m striker is in the mood for more as Sir Alex Ferguson’s men look to shake off last week’s shock defeat to Wolves.

The 2-1 turnover at the Molineux ended a 29-game unbeaten run for United in the league.

It killed their chances of emulating Arsenal’s Invincibles of 2004 and blew the Premier League title race wide open.

Victory for City on Saturday would see them close the gap on their fiercest rivals to just two points.

Giggs insists trophies are the only things that count at Old Trafford – not an undefeated run. And it is a record 19th league title that drives on everyone at United, not the chance to be dubbed to new invincibles.

All eyes will be on the 157th Manchester derby to see how Ferguson’s league leaders respond to that defeat at Wolves – and whether City can prove themselves genuine title contenders.

But in Berbatov, Giggs believes United have a match-winner for the biggest occasions – and a player desperate to continue his incredible scoring feats so far this season.

After struggling to settle in at United following his move from Tottenham in 2008, Berbatov has repaid Ferguson’s faith in bucket-loads this term.

With three hat-tricks already – including five against Blackburn – the 30-year-old has just about    dispelled any doubts that he can cut it at Old Trafford – and Giggs believes he has the confidence to go onto even greater heights at the club.

“I think he’s been playing just as well as he has since he came to the club,” said the Welshman.

“The main difference is that he’s scoring goals.

“Ultimately that is what everyone from the outside looks at when you are playing up front. And he’s producing.

“Goal-scorers often do it. They might not play well for 90 minutes, but score a goal and that’s all that anyone remembers.

“That’s all that people are interested in – it doesn’t matter as long as he scores. I think he’s played just as well in the last two seasons, but he got off to such an unbelievable start scoring goals.

“That gives you confidence and you can see that within his play.

“When you are scoring goals as a centre forward you do act differently. You’ve got that confidence, that swagger and it’s good to see.”

Time was when Berbatov would be left on the bench for the biggest matches, with Ferguson preferring to deploy Wayne Rooney as a lone striker.

But such has been the differing fortunes of United’s two front men that Berbatov is almost certain to lead the line against City, while Rooney could be used in a deeper lying role.

The England international has scored only six goals this term – although his double against Aston Villa at the start of the month was the clearest indication that he is ready to return to something like his best form.

Meanwhile, Giggs has a simple message for anyone tempted to wallow after seeing United relinquish their undefeated record at Wolves.

Mick McCarthy’s men brought a shuddering halt to suggestions that United could go an entire league campaign without defeat.

And with home and away games against Chelsea, as well as trips to Arsenal and Liverpool after they host City, there are still plenty more potential pitfalls in Ferguson’s way before he can get his hands on a 19th league trophy.

English football’s most decorated player, Giggs, says more silverware is the only thing that counts at United.

“It’s more important that you win something,” he said. “It is all about winning.”