Ryan Giggs: 13th title would be my best 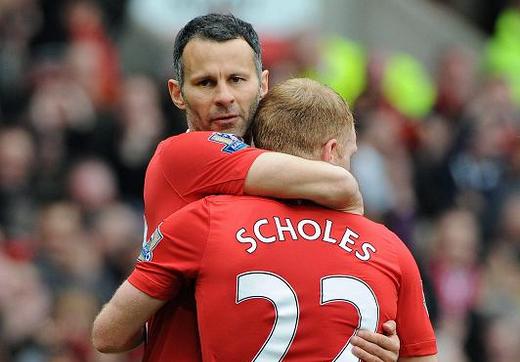 Ryan Giggs has one hand on a 13th title medal — and believes this could be the sweetest of the lot.

The Welshman reckons it will be a massive achievement if Manchester United can end a challenging season by retaining their crown.

Giggs, 38, admits the champions have been hit hard by injuries to the likes of Nemanja Vidic and Darren Fletcher for large parts of the season.

They also waved goodbye to a wealth of experience in the summer — even though Paul Scholes was then lured out of retirement a few months later.

And, of course, they have had to topple neighbours Manchester City who began the season in such inspired fashion but now find themselves eight points adrift.

It all adds up to a brilliant effort from the Red Devils according to the Premier League’s most decorated player.

He said: “To win the title would be huge when you look at the spending power of Manchester City.

“You had to give credit to City at the start of the season as they were playing well and scoring lots of goals.

“We just had to hang in there.

“But then there’s injuries we’ve had. We’ve not had the best luck this season — we’ve had injuries to key players such as Vidic and Fletcher.

“So a lot of credit has to go to the lads who have stepped in.”

In the early weeks of the campaign, it looked as though it could be a season of transition for Alex Ferguson’s champions.

“Then the challenge we faced in bringing in a new goalkeeper.

“David de Gea came in for a lot of criticism early on but he’s worked hard and he’s showing terrific form at a key time.

“Then there’s all the new talent we’ve blooded so winning it would be a massive achievement.”

The return of fellow golden oldie Scholes has been the catalyst for an amazing run of form by the champions.

Since the 37-year-old midfielder came out of retirement in January, United have taken 34 points from a possible 36 to leave rivals Manchester City floundering.

And Giggs said: “Scholesy coming back was a massive bonus for us at the time, having him on the pitch and around the place in training. He’s still the best trainer — you can’t get the ball off him. He does things other players can’t do.”

Giggs has also been instrumental for United again — with his last-gasp winner at Norwich in February looking like one of the defining moments of the season.

He recalled: “You could see what it meant to us in the celebrations. It was pure emotion, pure relief.

“It was massively important and it definitely gave everyone in the squad, as well as the fans, a lift.

“You need those moments in a season if you are going to go on and win the league. Moments like that provide belief and boost confidence — just look at what Federico Macheda’s goal against Villa did for us a few years ago.

“Who knows? That game at Norwich may turn out to be one of those days we look back on as being pivotal.”

In this kind of form, United seem highly unlikely to take their eye off the ball and let their eight point lead slip.

But Giggs insists his team-mates will not take anything for granted between now and the end of the season on May 13.

That run in starts against Wigan tomorrow night. And Giggs added: “You concentrate on doing your thing and looking after your own form personally and as a team. That is what we’ve done.

“We are experienced enough to know that there are still plenty of points to be gained and lost.

“Until it is mathematically impossible for us to be caught, we won’t be counting our chickens. We never do.”

“The key word is momentum. We’ve chased down teams before and been chased down ourselves.

“What you’re looking for is a bit of form at the right time and then feed off positive results and go on a roll.

“I think we’re doing that at the moment.”