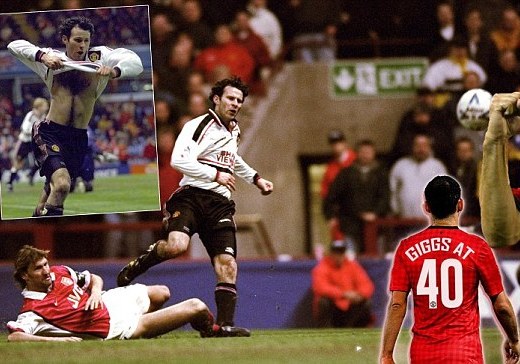 Many generations of football fans have witnessed mazy runs, outstanding strikes and consistent quality from perhaps the Premier League's greatest ever player. Here, we pick out the best 10 goals from his outstanding career – tell us your favourites.

Left foot, right foot, headers, free-kicks..and he's not bad on the volley. This goal at Craven Cottage shows off Giggs' exquisite timing and technique as he arrives from the right-hand side and sends a spinning strike into the corner. Angled strike: As Ryan Giggs matured, the variety of his goals and quality of his finishes consistently improved Before the days of David Beckham, Cristiano Ronaldo and Wayne Rooney, it would be Ryan Giggs (or Denis Irwin) on free-kick duty for United. And if this powerful, curling free-kick against Blackburn is anything to go by, the Welshman may have had a case to take a few more!

He may have been well-into his mid-thirties but Giggs still retained, and indeed retains, that imagination and burst of pace over a couple of yards. Against West Ham, Paul Scholes pinged a meticulous crossfield pass onto the toe of Ryan Giggs, who controlled beautifully, before stepping away from Carlton Cole and Scott Parker and slotting a right-footed effort into the corner. He would go on to receive the PFA Player of the Year Award that year. Oh, and an eleventh Premier League title. A pre-cursor for the wonder strike that follow two years on against Arsenal, Giggs sprinted onto a pass from Teddy Sheringham, glided away from two defenders and thundered a finish into the roof of Angelo Peruzzi's goal. The goalscorers that night: Sheringham, Scholes, Giggs for United. Zidane and Del Piero for Juve. In good company. Blast from the past: This finish against Juventus reminds many of the wonder strike versus Arsenal in 1999 Time to celebrate: The Welshman did little to hide his joy after scoring in a big win over Italian giants Juventus

Anyone who admired the Manchester United sides of the '90s will love this goal. It is not the most aesthetically pleasing but it demonstrates what that United side was all about in Europe. High tempo, brilliant wide players and exhilarating football played at devastating pace. In this classic against Barcelona, the wizards of the wing combined, as David Beckham skipped by the Barca full back and whipped in a cross, where Giggs arched back and looped his header into the goal. (P.S. watch beyond Giggs' header to see a brilliant Beckham free-kick). Jumping for glory: The athletic winger leaps highest to score a rare header in a thrilling 3-3 draw with Barca Sprinting away: That evening was just one of many United enjoyed in that season's Champions League

Another from Giggs in the early days, like dynamite, exploding past players and lashing the ball home. It was this kind of slaloming run and piercing finish against QPR that brought along comparisons with George Best. It seemed poignant that twenty years on, a 39-year-old Giggs, now the senior citizen of the United side, sporting flecks of grey, rather than bushy curls, should score to seal United's victory at Loftus Road towards the end of last season. Talented: Ryan Giggs showed his ability from his early days in the United team, as highlighted against QPR

Now entering the autumn of his career, this goal personifies the remodelling of Giggs' game, as he grew to influence football matches with flickers of understated genius. This glorious chip over Petr Cech, as the ball edged off the outside of Giggs' left boot after a measured pass from Gary Neville, deserves more recognition. Big-game player: Ryan Giggs scored against rivals Chelsea, one of many important goals in his career

Aged 18, Giggs touches the ball past Dean Austin, slips it through the legs of Jason Cundy and rounds Ian Walker. It is the searing speed and alarming simplicity of this goal that makes it so special. A glimpse of the Welshman's devastating potential. Rampaging winger: Ryan Giggs' strengths in his early years were his exceptional pace and dribbling ability

It seems strange to think that there has ever been a time when Ryan Giggs has been under pressure at Manchester United but in the spring of 2003, he most certainly was. Out of form (remember that open goal miss against Arsenal?), Giggs had increasingly become the subject of the supporters' frustration. And then he goes and does this, in Turin, against Juventus. Having come on as an early substitute, Giggs had already scored one when he collected a loose pass from Antonio Conte. He flew away from Lillian Thuram, before sidestepping Ciro Ferrara and Paulo Montero and on the run, without hesitation, placed his right-footed finish past Gianluigi Buffon, who was left rooted. The kind of goal that only Ryan Giggs can score. Cute finish: Ryan Giggs regularly impressed on his appearances against Juventus, home and away It wasn't just the individual brilliance of this goal but the importance as Giggs reinforced United's treble ambitions. An FA Cup-Semi Final replay. Extra-time. United down to ten men. And then he flies off, like a gazelle, gliding past Patrick Vieira and Lee Dixon, leaving Martin Keown on his backside. And what a finish. And then that celebration, hairy chest, shirt swinging in the air, fans pouring onto the pitch - does any image define the magic of the Sir Alex Ferguson era more than this? Lethal strike: The greatest, and possibly most important, goal of Ryan Giggs' career came against Arsenal Hairy chest: Almost as memorable as his goal that night was Ryan Giggs' emotional celebration