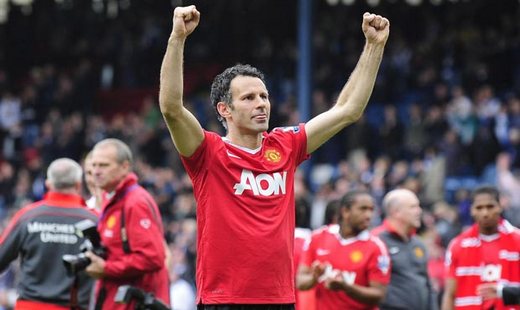 RYAN GIGGS has been tipped to become the Mr Invincible of the Premier League... by the man whose top-flight record he has just smashed.

The Welshman’s nine-minute cameo in the midweek win over Tottenham meant he eclipsed an appearances tally held by Tottenham’s Steve Perryman which had lasted 25 years.

Perryman played 613 Division One matches for Spurs over the course of three decades, a figure Giggs bettered by one when he came on as a second-half substitute in the 3-0 demolition of Harry Redknapp’s men.

Giggs hopes to make it League game No. 615 when Man Utd host Arsenal this afternoon and there still seem many matches left in him.

So much so that Perryman believes whatever tally Giggs reaches, it will never be eclipsed by anybody.

Like Giggs, Perryman was a home-produced player and served Tottenham from 1969 to 1986 in midfield and defence, captaining the team to back-to-back FA Cups triumphs at Wembley in 1981 and 82.

Perryman, these days director of football at Exeter, said that Giggs was a fitting recipient of the record, stating: “I’m absolutely delighted it is Ryan who has done it.

“I am disappointed for myself, but my record couldn’t have gone to a better professional. What Ryan has achieved is phenomenal.

“What I admire about him is that he has developed his game as he’s got older and that has helped him towards that record.

“Will it be broken, like Ryan broke mine? I don’t think so. He’s probably got it for good.”

Giggs made his Manchester United bow way back in 1991 as a substitute against Everton just five years after Perryman’s own 17-year Tottenham career ended.

“Manchester United and Ryan Giggs just go together in much the way myself and Tottenham Hotspur did,” continued Perryman.

“A lot of things have to go right for that kind of appearance record and I am not sure it will happen again in the history of the Premier League.

“I guess I was just unlucky Ryan Giggs popped up at Old Trafford, otherwise I would still have the top-flight record!

“You have to get into the first team very early for a start to have a chance of having so many appearances.

“I was 18 and Ryan was 17. Then you have to be consistent, have some luck and prepare properly.

“You also have to be happy and right at the club. You have to fit in. If you are not happy, you will find injuries.

“You will pick up niggles if you are stressed because that is what stress can do to you. I never had that and I don’t think Ryan has because he likes it at United, just as I did at Spurs.

“Loyalty is a two-way thing. It only suits if the two parties are happy. If you are treated right, then you will respond and give it back.

“If you like the club and they care about you, as happened with me at Spurs, then you are content and will play well and work hard.

“Also, very importantly, you have to work for a very good manager.

“I had Bill Nicholson as my boss for most of my Spurs career. Ryan has had Sir Alex Ferguson for his.

“Managers are not selecting players out of kindness. Their jobs depend on their team choices so you have to have been doing something right for most of the time to keep being chosen.

“When you have a manager like I had and like Ryan has who appreciate you and respect you, then you have to do something really stupid to set them against you.

“To have the consistent backing of a manager for so many years is terrific. The one thing that helped me was that I was never permitted to get above myself. Firstly I had people close to me who were always telling me I was rubbish no matter how well I played!

“Then I had Bill Nich, who would never let me get above my station, and I’m sure that’s been the case with Ryan and Sir Alex.

“I recall one famous occasion when I played what I regarded as my best match against AC Milan in the semi-finals of the Uefa Cup in 1971.

“I was always a team player and set great store by that and have always been reluctant to pick out my individual favourite performances, but against AC Milan I know I did well and scored twice.

“For a player who was normally lucky to even have two shots in a month, this was an achievement!

“After matches I always used to find a quiet spot before I left the dressing room to meet friends. I used to sit in the treatment room.

“It was obvious he wanted me to hear and knew I’d respond. I asked him why and he replied ‘He very nearly didn’t pick you tonight’.

“I was the star of the evening. but I left the ground wondering what I had done wrong to almost not be chosen.

“I am not sure Bill Nicholson was into mind games. But I suspect he may have put the doc up to it to keep my feet on the ground.

“If you got too big for your boots he would tread on you very hard. It was part of the discipline and good habits. You have to buy into that and adhere to them if you hope to have time in the team.

“From what you hear. I think Sir Alex Ferguson is similar. I am sure Ryan will have experienced moments like that no matter how much he has achieved. However, you can be led, and that is important, but at the end of the day it comes down to yourself.

“Ryan has the advantage these days of better diet and things like his yoga. But those kinds of things can be on offer, but you still have to do them and he’s prepared himself so well for so many years.”

“United are not permitted to lose matches and to cope with that is a big stress,” said Perryman.

“Also being a homegrown player brings its own pressures. I was a home-produced player and then I became Spurs captain. It was a heavy responsibility.

“I always knew if we had lost and then I had a letter in my post at the club addressed to ‘Steve Perryman – captain’ it was not going to be a good one!

“You take a lot on yourself when you are skipper or like Ryan a server down the years. That kind of responsibility can make some players, but it can destroy others.

“I was assistant manager at Spurs when Ryan made it to the first team at United and I watched him at close quarters.

“As a former right-back I was glad I didn’t have to face him... let’s put it that way.

“As for his record, it will last. No-one will break that.”