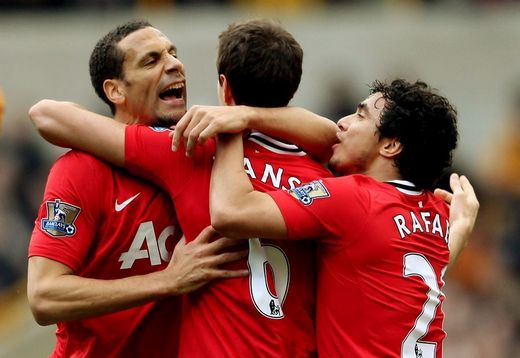 Five goals inside little over an hour ensured United would stretch the lead at the top of the table to four points as ten-man Wolves were dismantled almost at will at Molineux.

Antonio Valencia was simply outstanding on his return from injury and he added to Jonny Evans' opener after Ronald Zubar was sent off six minutes short of half time. Danny Welbeck made it three in first half stoppage time and a brace from Javier Hernandez proved to be the end of the scoring.

That was perhaps a surprise to many given the manner in which Wolves had been savaged, with Manchester City's superior goal difference still a factor in the title race, but nothing should detract from a third 5-0 win on the road in the Barclays Premier League this term.

After a spell of applause for Fabrice Muamba, following his shocking collapse in Bolton's FA Cup tie at Tottenham, there was a largely subdued atmosphere for the opening period with the home fans perhaps low on expectation considering their team's recent poor run.

It took nine minutes for the champions to tear a huge hole in the opposition defence but Rafael could not pick out a man in the middle after being played in by Valencia, the two changes to the XI that faced West Brom combining to good effect on the right flank for the first of many occasions.

Wolves briefly mounted some pressure with Kevin Doyle's shot easily fielded by David De Gea and Steven Fletcher flicking a header from a Matt Jarvis centre wide, even though the offside flag was up in any case. Three minutes later, it was United who broke through after Michael Carrick's shot deflected off Richard Stearman for a corner.

Wayne Rooney played the flag-kick to the far post and Carrick's intelligent sidefoot volley back into the danger zone was met by Evans, who swivelled to thump home his first goal for the club on his 119th appearance. Things went from bad to worse for Terry Connor's strugglers when Zubar inexplicably launched into wild tackles on Rooney and Welbeck within 11 first-half minutes. Welbeck received treatment as referee Anthony Taylor produced the inevitable second yellow card.

Scenting blood, United responded to the 10 men gamely winning a corner by breaking down the other end to double the lead. Welbeck's header out was moved on by Hernandez to Rooney, who produced by far his best pass of the half to release Valencia down the right. The fit-again Ecuadorian had plenty to do but utilised his pace to stunning effect and arrowed a brilliant finish just inside the far post.

Evans displayed his confidence with a raking pass to bring Valencia into the game again and an accurate cross, as is usually the case from the ex-Wigan man, allowed Welbeck to sweep an instant finish past the wrong-footed Hennessey to make it 3-0 before the interval.

The second half was always likely to be a case of damage limitation for the hosts with Hennessey doing well to push away a decent attempt by Rooney that skipped off the turf. However, the Welsh keeper had no chance when a short corner led to Valencia inviting Rafael to centre and Hernandez guided home with the simplest of headers.

Hernandez clearly had the taste for goals again as he buried number five soon afterwards, following a superb move involving Valencia and Welbeck with the England international's flick in the one-two a flash of real genius. The Reds' football, against demoralised opponents, was mesmerising and majestic with Hennessey needing to race out to deny Hernandez a hat-trick.

Wolves conjured up a response that finally extended De Gea, but the Spaniard was equal to efforts from Michael Kightly and Fletcher. A sixth goal proved elusive as Fabio failed to find the required finish after coming on as a substitute and Hennessey kept out Welbeck with his right foot following great approach work by Rooney.

Paul Pogba, another substitute, hammered off target and Hernandez could only loop a header comfortably into Hennessey's arms as United were unable to add to the scoreline, despite assuming total control. So it's all eyes on the Etihad Stadium for Wednesday's clash between City and rejuvenated Chelsea.

David De Gea
A 10th consecutive start and the continuity is helping the young Spaniard to enjoy some consistency in his game. Not tested until diving to deny Michael Kightly and Steven Fletcher in quick succession in the second half, which showed his concentration levels are top notch.

Rafael
Tenacious and got forward at will to support Antonio Valencia down the right. Should have picked out Javier Hernandez when his early cross evaded everybody and survived half-hearted penalty appeals after showing more desire to win a 50-50 ball with Matt Jarvis inside the box. One first-time pass down the line to Valencia was excellent and it was his cross that allowed Javier Hernandez to head in his first goal.

Jonny Evans
Will be overjoyed with his first goal for the club after a long wait and he snapped up the opportunity like a seasoned striker. Alert throughout, composed in defence and a majestic pass to Valencia led to the third goal. His defensive work is his day job, though, and one clever reading of the play to snuff out Jarvis' pass was also impressive.

Rio Ferdinand
On guard from the very first whistle, he was in control against Steven Fletcher and resolute throughout. Able to play under no real pressure following the sending off and indulged himself with a fabulous crossfield pass to Valencia, United's main attacking outlet.

Patrice Evra
A quiet display from the skipper who did his defensive duties with minimum fuss and, although getting forward freely, he did not contribute too much of note in the attacking third. A neat header infield in the first half summed up his organisation and efficiency and he'll have busier afternoons.

Antonio Valencia
Close to a 10 out of 10 performance from the returning right winger, who was unplayable at times. It was possible to almost feel sorry for Stephen Ward as the Wolves skipper was handed the unenviable task of halting somebody with the speed and power of a runaway train. His goal was brilliant and he also set up goals for Welbeck and Hernandez. Welcome back!

Michael Carrick
Found himself in advanced positions on a number of occasions, choking an early shot wide. It was his deflected attempt that earned the corner for the first goal, which he assisted with a neatly-cushioned touch for Evans to score. Managed another shot just before the half-time whistle and looked as classy as ever in the midfield.

Paul Scholes
Calm and measured from the off, dictating the tempo and pulling the strings. Highlights of another polished performance were a delicious pass wide to the ever-dangerous Valencia and a disguised through ball to Hernandez that was miscontrolled by the Mexican. Perhaps a little fortunate not to be booked after a couple of late tackles.

Danny Welbeck
A 10th goal in all competitions this season, finished emphatically, and another all-action display from the youngster. Received an early wake-up call after being beaten by Ronald Zubar but it was the defender's foul on Welbeck that earned a second yellow card. A gorgeous flick in the build-up to the fifth goal was sheer quality and the only negative was a booking for a foul on the sprightly Michael Kightly.

Wayne Rooney
Took some time to find his passing range but the ball down the line to Valencia for the second goal was perfectly timed. Dropping deep to allow others to get onto the scoresheet today, he became heavily involved after the break and impressed Sky enough to earn their man-of-the-match award. Unlucky to see Wayne Hennessey push away a fine, curling effort.

Javier Hernandez
Struggled to get involved in the early exchanges as the passes weren't reaching him but his lay-off helped spark the move that led to Valencia's goal. Showed a rare flash of temper after being clumsily elbowed by Richard Stearman in the box but he regained his composure to do what he does best in the second half. A close-range header and buried finish means it's now 10 goals in the league this season for the predatory Mexican.

Paul Pogba (for Carrick, 57m)
Another run-out for the Frenchman, whose future continues to be the subject of much debate. Fitted in pretty seamlessly, albeit against well-beaten opponents, and certainly looks first-team quality.

Fabio (for Evra, 63m)
Joined his twin Rafael on the pitch and managed to get forward to fire one shot wide from a Welbeck pass.

Chris Smalling (for Evans, 75m)
Played in protective headgear again after his injury whilst on international duty with England and quickly showed his capabilities by neutralising a dangerous run into the box by Fletcher.