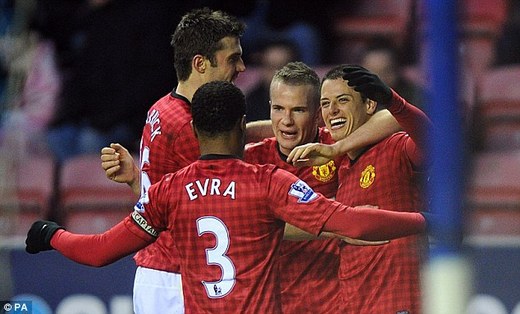 United started 2013 with a statement of intent by recording a comfortable 4-0 away victory at Wigan Athletic to maintain a seven-point lead at the top of the table.

Any thoughts of a repeat of the costly defeat at the DW Stadium last season were dismissed with strike partners Javier Hernandez and Robin van Persie sharing the goals.

Sir Alex made five changes to the team that saw off West Brom with Rafael enjoying a welcome return and Ryan Giggs operating on the left flank. Although it was a subdued opening from the Reds, Hernandez forced a comfortable save out of Ali Al-Habsi before having a goal ruled out on 12 minutes.

It was the right call by the officials but Giggs' pass to create the opening was superb and the 39-year-old was busy turning back the clock on the left wing and being serenaded by the away supporters. Wigan kept possession impressively but, a wild shot from Jean Beausejour aside, there was little threat and the Barclays Premier League leaders began to impose themselves on proceedings.

Ashley Young was denied a penalty after he and Beausejour tumbled on the edge of the box with referee Andre Marriner waving play on but the pressure started to build on Al-Habsi's goal. A delighful first-time cross by Giggs was defended manfully by Maynor Figueroa at the far post to lead to United's first corner of the afternoon and the class started to tell.

Gary Caldwell had to clear when Al-Habsi spilled a van Persie flag-kick with Jonny Evans and Giggs trying to profit and the keeper also dealt with a Rafael drive rather unconvincingly, even if he did parry it to safety.

With 35 minutes on the clock, the breakthrough duly arrived courtesy of the ever-alert Hernandez. Rafael won a header to find Tom Cleverley and the former Wigan loanee helped the ball down the line to Evans, who produced a measured cut-back. Although Patrice Evra miskicked, he forced a one-handed save out of Al-Habsi at the second attempt and Hernandez pounced to convert the rebound. 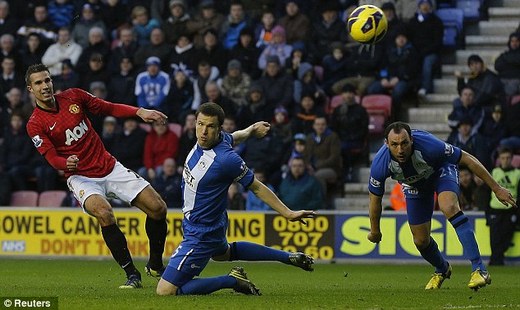 A second goal effectively killed off the match as a contest before the interval as Michael Carrick's pass found its way past two defenders to allow Hernandez plenty of space to assess his options. The Mexican decided to pass to his strike partner and van Persie did not disappoint, sitting Ivan Ramis on his backside with a dummy, before guiding a right-footed finish wide of the motionless Al-Habsi for a strike of pure genius.

There was still time for Hernandez to find the net again before the half-time whistle, following some stunning work in midfield by van Persie, but the lively forward was again rightly flagged offside when prodding the ball under Al-Habsi.

The second goal appeared to knock the stuffing out of Wigan after the restart with United assuming complete control. Despite dominating, Hernandez was wayward with a couple of ambitious shots and the hosts thought they had pulled one back completely against the run of play when Arouna Kone finished off a Franco Di Santo centre from an offside position.

The scare prompted an instant response with Young's inviting cross teasing Al-Habsi out of his goal but Hernandez could only nudge it over a gaping net under some pressure. However, the predatory Mexican was not to be denied as he soon notched his sixth goal in six games against the Latics. 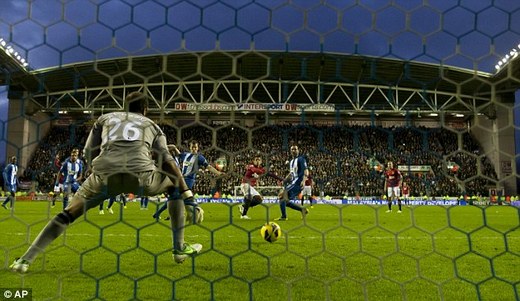 Van Persie's free-kick deflected off the wall and into the path of Chicharito, who sharply despatched an unstoppable shot past Al-Habsi with textbook technique. Turning on the style, van Persie powered his way through to sweep just over the top as it became a question of how many goals the Reds could net against deflated opponents.

Sir Alex decided to hand Chris Smalling and Shinji Kagawa a run-out at the expense of the flawless Rio Ferdinand and Carrick before Danny Welbeck replaced Young. The changes in personnel seemed to affect United's rhythm and Smalling caused a nervous moment with a back-pass before being booked for a foul on Kone.

To be fair, the defensive substitute was extremely fortunate not to receive a red card for the offence, which looked like a professional foul, and Jordi Gomez was inches away from dishing out his own punishment when his free-kick flew just wide of David De Gea's right-hand post. 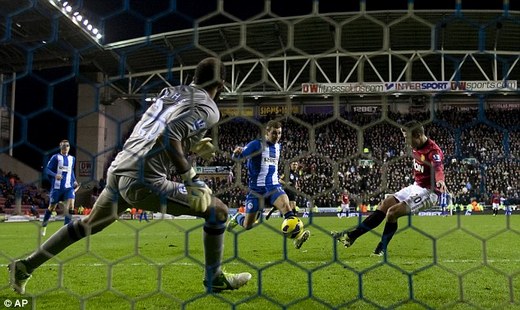 The Reds still had the final say, though, as Van Persie got on the scoresheet again with a couple of minutes remaining. Rafael's flick led to an error by Beausejour which allowed Welbeck to unselfishly tee up the Dutchman. The leading scorer sent the ball back across Al-Habsi on the stretch for his 19th goal of his first season at Old Trafford.

Rarely are three points secured away from home in the Premier League as comfortably as this as United remain utterly determined to win back the title.