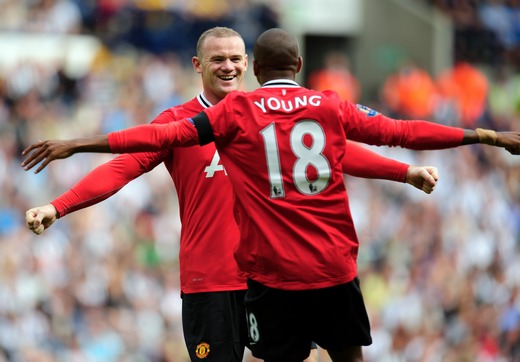 The champions kicked off the Barclays Premier League season with a hard-fought victory at West Brom, repeating last season's 2-1 success thanks to a strike from Wayne Rooney and an own goal by Steven Reid.

Rooney drilled in an early opener but debutant Shane Long shot past David De Gea for a surprise equaliser and it took Young, on his first league appearance for the Reds, to set up the winner with nine minutes left.

United made an impressive statement of intent from the first whistle as the bold, youthful line-up selected by Sir Alex posted a positive start. Although Paul Scharner managed the first effort of note, it was all United and there was no surprise when Wayne Rooney drew first blood - as he did in this fixture last term.

Rooney expertly flicked a Fabio pass out to Young before collecting the return ball and curling a left-footed finish beyond the reach of Ben Foster in the 13th minute. The Reds were in control with Rooney blasting wide after being afforded too much space and Nani casually lifting a finish wastefully over the top following good approach work by Rooney and Danny Welbeck.

Nani again shot too high when Foster could only pat down a Young corner but Albion worked their way back into the game ominously. De Gea made a flying stop to thwart Scharner, who had stormed onto Long's lay-off but, two minutes later, the Spanish keeper coped less effectively when Long decided to have a crack himself. The Irishman fired across de Gea when Chris Smalling was unable to prevent the shot from the left-hand side of the box.

Conceding an equaliser was harsh on United but the defence seemed to lose some concentration as Fabio's panicky header away allowed Chris Brunt to volley over the bar. And de Gea had to claw away a Somen Tchoyi cross that deflected off Nemanja Vidic and worryingly looped goalwards as half-time approached.

The second period became less eventful and there was a blow when captain Vidic finally made way after failing to shrug off a knock. United failed to carry any significant threat with Rooney glancing a header wide from a rare half-chance and Nani's free-kick coming to nothing after Young was felled on the edge of the box by Brunt.

Dimitar Berbatov was introduced in a bid to add more of a cutting edge but it was Young who continued to provide much of the attacking thrust. The former Aston Villa winger's dipping shot drifted just wide of the far post with Foster flailing at thin air.

Nani sent an awkward header wide from Fabio's left-wing cross and the visitors' attempts to create any sustained pressure were affected when another injury disrupted the defence - with Ferdinand having to be replaced by Phil Jones, leaving a very youthful back-five for the final quarter of an hour.

Such setbacks would have a major detrimental impact on lesser teams but the champions are made of sterner stuff and snatched the winner with nine minutes left. Berbatov played the ball off to Young, who showed real intent to fly down the left past Brunt and see his cross deflect off Tamas and, ultimately, Reid before nestling in the back of the net.

Tchoyi lashed one effort off target and De Gea safely fielded a Brunt effort as the Reds held out - to their great credit - to start the defence of the title with a valuable away win.

David de Gea
Will feel he should have kept out Shane Long's equaliser but showed great composure to recover and survive a physical onslaught from the Baggies. Made a great stop to deny Paul Scharner and clawed away an awkward Somen Tchoyi cross that deflected goalwards. Stood up to everything asked of him in the second half.

Chris Smalling
Slotted in smoothly and looks like he's been playing right-back for years. Gets forward to help the attack and, although he was guilty of a couple of stray passes after the break, this was a formidable display - particularly considering the youthful look to the defence at the end.

Nemanja Vidic
Captain courageous was unable to shrug off an injury but manfully battled on before making way for Jonny Evans seven minutes after the interval. Unflappable under pressure, he led by example and dealt with the threat posed by Long and Tchoyi.

Rio Ferdinand
Took over the armband from Vidic but suffered a similar fate when he hobbled off soon afterwards. Handled the physical presence of Tchoyi and read the game superbly. Was under pressure but answered all the questions posed by the home side.

Fabio
Tested but stuck to his guns and emerged as arguably the Reds' top defender on the day. Deflected a Reid shot wide and snapped into tackles but survived one nervous headed clearance that was volleyed off target by Chris Brunt.

Nani
After a matchwinning display at Wembley, he was unable to repeat the Community Shield heroics but remains a major threat. Shot over the bar on a couple of occasions in the first half and sent a header wide from a Fabio cross as the Reds hunted for a winner.

Tom Cleverley
The talented youngster makes this midfield lark look easy. Always has time and makes space, keeping his passes neat, tidy and accurate. One agile interception was a highlight and his economical use of the ball was a contributory factor to this excellent result. A superb first league start for United.

Anderson
A driving display with a really positive range of passing, particularly out to the flanks. Influential, particularly in the opening hour, one skilful dribble summed up his growing confidence. Even filled in as an emergency centre-back at one stage, to again show increasing responsibility and maturity.

Ashley Young
A star all afternoon, who ran the defence ragged at times. Capable of supplying crosses that can't be defended against, his flicks and first-time touches were also excellent. Picked up an assist for the Wayne Rooney goal and is even claiming the second goal for himself, which came after a positive burst past Brunt and cross which went in off Steven Reid.

Wayne Rooney
Roy Hodgson admitted his side struggled to cope with the England striker who repeated last season's feat of opening the scoring at The Hawthorns. It was an assured finish, after a beautiful touch to Young in the build-up, to get him off the mark quickly for the campaign. Always a main man for the Reds, he had another couple of attempts but, to his credit, also defended admirably.

Danny Welbeck
Made an impudent start with an early backheel and his tracking back meant United were defending from the front. The leggy youngster has added strength to his game this term and this was a decent shift to reward the manager's confidence in him.

Jonny Evans (for Vidic, 52)
Strong and purposeful, he filled in effortlessly for the captain and won a couple of important headers - including one when Ferdinand had just departed prior to a dangerous free-kick.

Dimitar Berbatov (for Welbeck, 65)
Added grace and guile to the frontline and it was his lay-off that ultimately led to the winner. An astute front-runner, he gave United a fresh dimension.

Phil Jones (for Ferdinand, 75)
Nerveless and unflappable, he made one important tackle on Long as he bore down on goal. Completed a very young back-five for the closing quarter of an hour.\